Cause of AIDS lies in imbalance of chakras 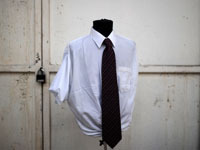 Our ancestors knew things that today's scientists are only starting to consider. However, this knowledge is getting lost, our elders die, and the unique experience of generations is vanishing. Some of this knowledge stays in the form of superstitions and folk myths. However, sometimes their meaning is lost, which makes the factual knowledge useless.

Sergei Gagarin was one of the few Russian bioenergy therapists who conducted special studies back in the 1980s at the Academy of Sciences. Several years ago the famous healer and bioenergy therapist intelligibly and clearly explained many folk superstitions to "Pravda.Ru". For example, he described why an ax or a knife cannot be left blade up but must be stuck to a wooden deck and why sitting at a corner of a table may hinder marriage for the next seven years.

It is very simple: the property of the element of metal is destruction of structures. With this destruction the energy runs down the blade of a knife or an ax. This energy flow is called the "line of Albert" that destroys the structures of the surrounding area, creating a negative zone.

To counteract this phenomenon, all nations applied the knowledge of the properties of the wood element. A knife or an ax would be placed in the wooden chopping block. During meals both peasants and aristocrats would stick their knives into in the table surface.

With respect to the angles of the table, it is believed that at the corner connecting planes the energy flow drains down in the form of an energy needle.

Most tabletops are located at the solar plexus. The official science recognizes that the solar plexus is a vital center (ganglion), but does not explain why. In oriental philosophy it is regarded as the energy center (chakra Manipura) that transforms and redistributes energy from the chakras with a surplus of energy to the chakras that are lacking energy.

Sitting at the corner of a table from time to time is not harmful to human health, but may cause imbalance of power supply system of the body and various diseases.

People of middle age have stable energy, the elderly - insufficient energy, and children - excessive energy. Grandparents and grandchildren help each other.

Sergei Gagarin also provided an explanation of such a terrible disease like AIDS. The conventional medicine has not yet accepted his interpretation. Yet, nobody has refuted it yet.

He believes that any impact on the person or any reaction to the impact can be described by frequency parameters. In terms of energy, in normal humans there are seven basic unpaired chakras that carry energy balance in the bodies and life-support systems. These energy centers are implementing energy transfer in certain frequencies.

The 1970s (estimated time of AIDS emergence) was the time of hippies and rhythmic rock craze. It was noticed that "abuse" of rhythmic rock music by a person causes excess energy in the so-called lower chakras that among other things are "responsible" for sexual activity. Rhythmic rock music supports the artificial recharge of the chakras, and they cease to work and, ultimately, get destroyed.

If the energy balance in some chakras is disturbed, other chakras are beginning to "drive" additional energy to maintain the system as a whole. The remaining chakras take on additional workload and as a result the energy for the operation of the entire body is insufficient. The body is not strong enough to suppress infection, maintain health and so on.