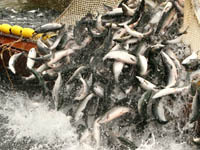 Nizhny Novgorod scientists have developed the project of a new and unique research vessel. The vessel will become a floating base to study the sea fish. The designers are certain that their creation will help them take the fishing industry to a whole new level. According to them, the new vessel will change the current situation in Russia, when demand on seafood considerably exceeds supply.

The specialists of Nizhny Novgorod's well-known Vympel design bureau were given the task to build the vessel which would be able to move very fast and stay noiseless at that. The factor of noise is extremely important because it would be very difficult for scientists to study the fish if the research vessel produces too much noise.

The customers told the bureau that the vessel must be large enough, but it must also be as noisless as a motorboat. The scientists designed special propellers and vibration-absorbing coating for the purpose.

"The low noise of this vessel became possible owing to the ship's lines that were selected in accordance with the calculations and tests in the pool. Such equipment as diesel power generators, electric engines and multiblade propellers required a special positioning on board the vessel too," Vesti TV channel quoted chief designer of the project Vladimir Volkov as saying.

The floating laboratory designed by the Nizhny Novgorod scientists is capable of conducting deep-water research works in any part of the world ocean. There are several state-of-the-art research complexes on board the vessel. Deep-water submersibles will be able to explore the ocean at the depth of more than 6,000 kilometers.

The development of the concept project was funded by Russia's Ministry for Industry and Commerce. Rosrybolovstvo (the Russian Federal Fisheries Agency) acts as a customer.

A small model of the vessel currently undergoes tests in a special pool which simulates waters, winds and storms. The vessel will be able to survive even strongest storms. It will not wreck even if it battles 11-meter high waves.

There will be only two of such unique research vessels built in Russia. They will operate in the Atlantic and in the Pacific oceans.

The city of Arkhangelsk, a Russian seaport, consumes a lot of cod. The residents of the city are known as cod-eaters. However, most of the cod that the Russians eat in the city is imported from Norway. This is absurd. Fortunately, the Russian authorities begin to realize that the fishing industry in the country may vanish without a trace if no urgent measures are taken.