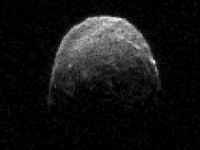 Scientists say that while the celestial body reached a distance smaller than the Moon, the planet is not at risk...

An asteroid 400 meters in length passed near Earth on Tuesday (8th), in an unusual approach, but not close enough to risk impact with the planet. The celestial body arrived at 21h28 (GMT) on Tuesday (8th) and was only 324,600 kilometers from the Earth's surface - a distance closer than the moon.

The phenomenon represented a great opportunity for astronomers around the world to study asteroids and their routes.

The trajectory of asteroid 2005 YU55 is well known to scientists and did not represent any problem of impact with the Earth. Even the gravitational influence of the asteroid had no detectable effect on the planet, neither by changing tides and much less in the tectonic plates.

A few hours after passing close to Earth, 2005 YU55 will peak in brightness, which is 100 times fainter than the limit of human vision. Astronomy centers are recruiting amateur astronomers to measure the brightness of the asteroid during its passage near the Earth.

"It's the first time since 1976 that an object of that size is so close to the Earth. This gives us a great and rare opportunity to study an object near the Earth like this," said astronomer Scott Fisher of the National Foundation of Sciences, talking to reporters via the Internet on Friday (4th).

The rock is about 400 meters in diameter - the size of a ship, and its orbit and position are well known, the researcher, Don Yeomans, of the NASA Jet Propulsion Laboratory in Pasadena (California) said.

A team from Carnegie Institute of America followed the passage of the asteroid in search of information on the mineralogy of primitive solar system bodies. NASA scientists are tracking the agency's 2005 YU55 at Goldstone, California every four hours starting on Sunday (6th) through Thursday (10th).

The 2005 YU55 was discovered in 2005 by Robert McMillan, Spacewatch Project, a group of scientists observing the solar system near Tucson, Arizona (southwest). The object is part of a set of 1,262 large asteroids which revolve around the sun and are more than 150 meters wide, which NASA describes as "potentially dangerous."

"We want to study these asteroids, so that if ever we met, we would know what to do with it," said Statler.

The closest an asteroid will approach Earth will be in 2094, at a distance of 269,000 kilometers, according to forecasts.

(With information from news agencies)