Shamanism: Religion next door to medicine

Shamanism is the national religion in many regions of the Earth, including Yakutia. The ancient belief has survived the Soviet persecution of the religion. During those atheist years the Yakut shamans were hiding their abilities. The remaining oyuuns, as they were called by the local population, and Udege (female shamans) soon found a loophole. With a talent for medicine, they found work as medical staff and veterinarians. Hiding under the guise of the Soviet medicine, Yakut shamans secretly conducted their magical rituals. 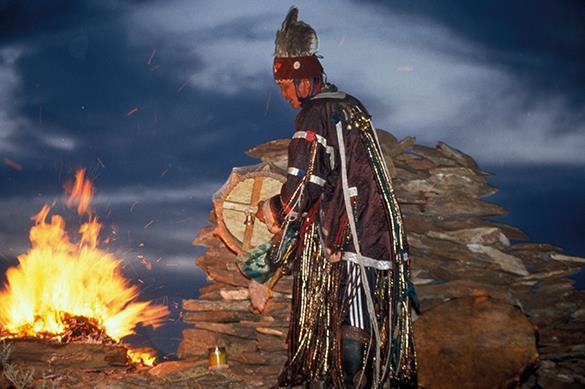 "When conventional medicine cannot help a person, people go to a shaman," told Andrei Martynov, chairman of the organization of the Yakut-Russian Society "Knowledge", a former vice-president of the Republic of Sakha (Yakutia) to Pravda.ru. "Our grandmothers say that when Peter the Great was seriously ill he sought help from the Yakut shamans. They say that the emperor did not have enough time to get to Yakutia, so he died."

A famous doctor of the republic Alexandra Chirkova lives and works in Yakutia. She is a prominent surgeon and physician accustomed to working with the latest developments of European medicine. At the same time, Alexander extensively uses techniques of shamanic medicine. In her words, modern science emerged from ancient methods of healing. The shamans in Yakutia were skilled psychologists who have used visual diagnosis.  Shamans are respected and protected by local people and local authorities. Some hereditary oyuunams can be reached only going through the tundra across Yakutia.

Not everyone would risk going to Tataysky ulus. To get there one has to travel half an hour on the river Lena, and then seven hours by car. This is far even for Yakutia. Vehicles often break down and roll over.  Locals say that this is the work of the great dead shamans who lived at one time on this land. Their souls are the guardians of the roads to the houses of oyuuns, protecting them from unauthorized eyes. If someone manages to get to oyuun, it means that this person arrived with an open heart and sincere intentions, including a strong desire to heal.

Yakut shamans treated people with tambourines. When oyuuns treat the sick, they speaks to the spirit of the disease. The medical ritual drum has to sound calm and measured, otherwise the patient will get nervous. There is another explanation of the healing power of the drums. The vibration of the drum improves the cardiovascular system, which is good for the health of other body organs. Depending on whether you want to speed up or slow down the patient's heart, the shaman accelerates or slows down the tambourine.  Shaman ritual instrument must be "alive" that is, repeatedly used, to talk with the spirits. If there is no "live drum", shamans sometimes use khomus, or Jew's harp. Khomus affects the power centers of the nervous system and relieves stress.

Almost all Russian shamans call the decline of spirituality the main cause of disease in humans. "People no longer believe, and therefore get sick often. Disease is the offspring of evil spirits. People think bad thoughts that attract illness and then suffer", told Buryat shaman Tyurgen Kam to the news agency "Taiga. Info."   In modern Yakutia and beyond people know the name of Vladimir Kondakov. He is considered a "white shaman." Kondakov was a physician by training, a medical doctor. Kondakov's Shamanism was in treating people.

Being the supreme oyuun of Yakutia for many years, he believed that man and nature have always been united. Nature is the "world tree", or Aal Kuduk Maas, which consists of three worlds. People were sent to the median world by spirits, the inhabitants of the upper world.

Accustomed to a carefree life, people got lazy and were "exiled" to the middle world. For the people not to forget ancestral relationship with the spirits, they gave the "mother heart" or Iye-Kut. In addition to Iye-Kut, people have Buor Kut, or "earthy soul." The third Kut connects people with the cosmos. Together the three form a flap sur. The Russian researcher Nikolai Alekseev defines shamanism as sur bioenergy, coming from a person and representing their will and mind.

If any of the three parts get deformed, then the entire body suffers. People get sick. Shaman rite helps people to restore harmony.   The Yakut shaman Michael Chashkin sees the cause of diseases of the modern humans as follows: "Now there is a lot of alcoholism, high blood pressure. Disease depends on the composition of blood. It deteriorated due to climate change, different food, clothes, drinking and smoking. People departed from nature".   Vladimir Kondakov once told reporters: "Do you think the world is based on the good? No, it is based on a balance of the good and the evil. Now, the evil prevails, and it's not that God is evil or weak. Evil is in humans. I conduct rites to maintain the nature." Yakuts believe that the drum of oyuun keeps a balance between the worlds, and this is the guarantee of balance and health.