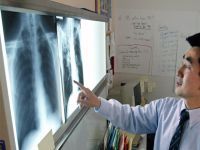 For the first time ever, according to the WHO, the killer disease tuberculosis is on the decline as the number of cases registered has dropped by 200,000 in a five-year period. That is the good news. The bad news is that in the global crisis when there is money to spend on missiles and bombs, under-funding might make the celebrations short-lived.

The revelations come in the World Health Organization's 2011 Global Tuberculosis Control Report, which shows that the number of people who fell ill with TB dropped from a peak of nine million in 2005 to 8.8 million in 2010. The number of deaths through TB also fell from 1.8 million in 2003 to 1.4 million in 2010. The report also shows that between 1990 and 2010, the death rate from Tuberculosis dropped by 40 per cent and that by 2015, all regions (except Africa) should reach their targets of a 50 per cent decline in TB mortality rates by 2015 (part of the Millennium Development Goals).

According to the WHO, one third of the world's population is infected with the TB bacillus. 5 to 10 per cent of these develop the illness or become infections at some time during their lives - those with HIV/AIDS are far more likely to develop Tuberculosis. The new development is encouraging: UN Secretary-General Ban Ki-Moon states that "Fewer people are dying of tuberculosis, and fewer are falling ill. This is major progress."

However, he also warns: ""But it is no cause for complacency. Too many millions still develop TB each year, and too many die. I urge serious and sustained support for the Stop TB Partnership in the years to come."

The high birth rate in many affected areas compounds the problem, as does also under-funding, specially important in the fight against TB (MDR-TB), or multi-drug-resistant Tuberculosis, a new form of the disease which has appeared in all regions and which resists the main anti-TB drugs. Many of the countries where TB is prevalent are low-income nations which rely heavily on external funding.

There is, according to the report, a funding shortfall of one billion USD for 2012, 200 million of which was ear-marked for MDR-TB.

In a world in which billions have been wasted trying to impose a government of looters, rapists and terrorists, murderers and torturers, many foreigners or with links to Al-Qaeda, in Libya, it comes as no surprise that there is no money to treat our sick children. After all, with leaders like these...