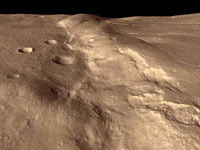 Russia will resume flights to other planets after a break of 20 years. The Phobos-Soil unmanned interplanetary station will be launched into space in November of this year to deliver the ground from Mars and its moons, Fontanka.Ru reports.

The information was revealed from Viktor Khartov, the chief designer and the general director of the Scientific and Industrial Association Named after Lavochkin (the Moscow region, Khimki).

"We are verging towards the return of our country to planets and stars. In over 20 years, we must learn to fly into distant space, for example, to Mars," the official said.

According to Khartov, the Phobos-Soil automatic interplanetary station was developed by nearly 10,000 people. However, only 30-40 people will supervise the flight of the station to Phobos and back.

Phobos-Soil is a planned Russian sample return mission to Phobos, one of the moons of Mars. The Chinese Mars orbiter Yinghuo-1 will be sent together with the mission, as will the Living Interplanetary Flight Experiment funded by the Planetary Society. Scheduled for launch late 2011 or early 2012, Phobos-Soil will be the first Russian interplanetary mission since the failed Mars 96 mission.

If successful it will be the first spacecraft to return a macroscopic extraterrestrial sample from a planetary body since Luna 24 in 1976.The Japanese Hayabusa probe has returned with a sample from 25143 Itokawa in June 2010, but the sample only consisted of some particles of dust, according to Wikipedia.