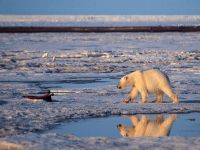 Scientists say the situation is so critical that the region could be ice-free in a few decades...

Melting polar ice is changing the landscape in the region. The amount of ice covering the Arctic fell in the summer of 2010 to a record minimum researchers said in a study to be published soon, suggesting that the thinning of ice exceeded the area of recovery.

The study estimated that the ice cover in the Arctic in 2010 - calculated based on thickness and extent - was lower than the previous record low in 2007, reflecting the trend of global warming.

Scientists predict that the Arctic could be ice-free during the summer in a few decades. This would create lucrative opportunities in areas such as shipping and oil exploration, but would also have consequences for weather around the world, beginning with the rise in sea levels.

The authors from the University of Washington in Seattle have developed a model to estimate ice thickness in the Arctic Ocean based on measurements of winds and atmospheric and ocean temperatures. The results were compared with actual samples.

"The really worrying fact is the tendency of reduction in the last 32 years," said Axel Schweiger, main author of the study, referring to satellite records of the Arctic. The reduction in 2010, according to the study entitled "Uncertainty in the estimated volume of Arctic sea ice by models" was "by a sufficient margin to establish a statistically significant new record."

Schweiger released data in an email report to Reuters on board the icebreaker Arctic Sunrise, from Greenpeace, which is in the Arctic Ocean between the Norwegian island of Svalbard and the North Pole.

The thickness of the ice is as important as its length, or even more, to understand what is happening in the Arctic. Some experts argue that the dramatic reduction in the extent of ice cover in recent years is because of a steady thinning in recent decades.

The method used in the study is criticized by some experts, who consider it less accurate than direct observation. The authors argue, however, that the general tendency of thinning of the ice ends up being recorded by this method.

The sea ice itself does not raise sea level when it thaws, but the warming Arctic may accelerate the melting of the Greenland ice sheet, which is composed of fresh water accumulated on the land in a volume sufficient to raise the overall global level of the oceans by 7 meters.