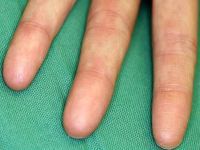 Fingerprints are used as markers of identity. There are no two alike. However, there are people with a rare condition called adermatoglífia that do not have fingerprints.

Doctor Eli Sprecher, a geneticist and dermatologist at the Sourasky Medical Center in Tel Aviv, Israel, and colleagues identified the genetic mutation that causes the disease. The study was published in The American Journal of Human Genetics.

Sprecher's team studied a Swiss family in which half the members have adermatoglífia and were born without fingerprints. The palms, fingers, toes and soles of a person affected are smooth, lacking the subtle grooves present in others. When fingerprints are taken, "instead of a beautiful regular pattern of concentric circles, one sees a smooth spot," said Sprecher.

Affected individuals also have fewer sweat glands in their hands and feet. The researchers found that affected family members had a mutation in the gene Smarcad1. Specifically, they have a mutation in a version of the gene that is expressed only in the skin.

Being born without fingerprints doesn't occur simply because one gene has been turned on or off, Sprecher said. Rather, the mutation causes copies of the SMARCAD1 gene to be unstable.

Humans have a longer version, or isoform, of Smarcad1, manifested in the rest of the body, but this version of the gene does not seem to be affected by who has the problem. The Swiss family study was identified while one of its members had trouble with U.S. immigration officials when trying to visit the country, said Sprecher.

"We all have a great fascination with fingerprints, that carve a natural identity in all of us, but nobody had the slightest idea what causes this protein. This is the first identification of a vital element in the formation of fingerprints."