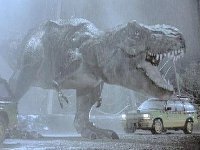 Mass media have recently reported that modern science is already capable of resurrecting dinosaurs. As a matter of fact, it is impossible to resurrect the lizards that became extinct 65 million years ago. However, it is possible to create new ones.

It is possible to resurrect the lizards with the help of two methods. The first one of them was practiced back in the 20th century. The technology stipulates the restoration of the appearance of an extinct creature by crossing the primitive domestic species that originate from the ancestor. German biologists used this technology during the 1970s to "resurrect" the extinct ancestor of modern horses - tarpan (Equus ferus ferus).

The scientists were crossing the species whose cells contained tarpan's genes. As a result of the experiment, they created the creature, whose appearance was exactly the same as that of their ancestor. The tarpans were released: several herds of them are grassing in Germany and Poland. Interestingly enough, the appearance of those animals has not changed much in several generations. The "resurrection" process was a success, which means that the animals hold the majority of the genes of the wild ancestor of the horse indeed. It is impossible to determine that, because the genetic bank of the tarpan has not been preserved.

This approach can not be applied to the resurrection of dinosaurs, though: there are no domestic species of the reptiles. There are descendants of this group, though - birds and the reptiles that are very close to the ancestral form of "terrible lizards" - crocodiles. Needless to say that nothing will come out of the crossing between these two categories of taxons, not to mention the fact that it is technically impossible.

Another method of "resurrection" is based on the creation of the hybrid embryo. If the DNA of an extinct animal is preserved fully, it is possible to implant the molecule in the nucleus of the elementary cell of a closer species. It is easy to do that as far as birds and reptiles are concerned: the entire development process takes place in an egg. The embryo of a mammal has to be transplanted into the body of a surrogate mother, whose role can be played by a female of the closest species. For example, to "resurrect" a mammoth, female Asian elephant will play the role of the surrogate mother.

Scientists plan to use this technology to "resurrect" the mammoth, the woolly rhinoceros, the big-horned deer and several other prehistoric giants, as well as the pouched wolf that was exterminated in the 20th century. The DNAs of all those animals are preserved very well.

That will not work with dinosaurs either, because scientists do not have any DNA samples of the prehistoric giants. The last species of this group became extinct as many as 65 million years ago. All organic materials in the bones of the lizards were replaced with non-organic substances during that time. Time has virtually turned the bones into rocks that look like dinosaur bones. The DNA can not be preserved under such consequences. Moreover, there was no permafrost period during the Age of the Reptiles, which makes it impossible to find a frozen dinosaur, as it often happened with mammoths.

As you can see, it is impossible to resurrect a dinosaur. However, scientists are certain that the "terrible lizards" can be created anew. It will be a different type of dinosaurs, though, that outwardly will have nothing in common with the real giants.

The early development genes, or homeotic genes, that control the formation of the first stages of the embryo, are rather conservative structures. They can be fully preserved with ancestors. This is the reason why the human embryo looks like a fish, then like an amphibian and then obtains the features typical for mammals.

Of course, birds still have the homeotic genes of dinosaurs. Those genes even work during the formation of an embryo, albeit for a very short period of time. Special proteins deactivate them afterwards to activate the specifically avian homeotic genes.

Is it possible to prevent the deactivation of the genes? Scientists from McGill University under the direction of Hans Larsson discovered that the gallinacean (chicken) embryo has a reptile-like tail during the early stage of development. The activity of the genes responsible for the formation of this tail stops at a certain moment, and the tail disappears. Dr. Larsson and his colleagues were trying to block the activity of the proteins that deactivate the tail genes. The scientists succeeded in the end, but the "tailed" chicken died before it was formed completely.

John Fallon and Mattew Harris with the University of Wisconsin conducted a series of experiments with mutant chicken embryos. The scientists noticed that some of the embryos had strange outgrowths on the embryo's jaws. The bumps turned out to be saber-like teeth, identical to the teeth of alligator embryos and, most interestingly, to several species of small Jurassic dinosaurs.

It later turned out that the mutants had a recessive gene, which normally kills the embryo before birth. However, the gene activates another, dinosaur homeotic gene that is responsible for the formation of teeth. As a result, Fallon and Harris created the virus which acted like the recessive gene, but was not lethal for the embryo. When the scientists implanted the virus into normal embryos, they had teeth growing without any harmful side effects.

The toothed embryo never hatched, though. US laws stipulate the destruction of hybrid embryos two weeks after the completion of experiments.

Dr. Arkhat Abzhanov of Harvard University achieved biggest progress in the field. The scientist determined which homeotic dinosaur genes are responsible for the formation of the typical dinosaur snout rather than the bird beak. He also discovered the proteins that deactivate those genes.

After that, Abzhanov added other proteins in embryo's cells that block the "deactivators." As a result, the chicken grew a pretty crocodile-like snout, the embryo stayed alive and continued to develop. However, the scientist had to kill the embryo after 14 days.

All of the above-mentioned works mean that it is possible to create dinosaurs from birds. However, birds have many other dinosaur homeotic genes, which scientists don't know yet. If we eventually see a new dinosaur, the creature will not represent any of the dinosaur species that previously inhabited planet Earth. The genome of the new creature will include the bird DNA, which classic dinosaurs did not have. The creature will represent the new species created by man, although its structure and physiology will be typical of genuine "terrible lizards."