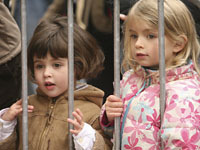 Inter-racial mixing isn't what many people think. I heard about one white person who believed that if whites and blacks have kids they're destroying the white race. No, they're not. The genes for the white race are still there, but their opportunity to be singularly expressed in the children are decreased.

The traits for "race," of course, are more complex than just hair color but the principle is the same.

If there is something we can call "half and half," it's in how genes are expressed when they come together, but the actual genes themselves are not diluted or changed from the inter-racial mixing. For example, as far as we know, President Barack Obama is a child of a fully black father and a fully white mother. He has 100% genes for the white race and 100% genes for the black race, but what we see (that is what is expressed physically when those genes come together) is determined by which genes are dominant. In certain cases, depending upon the genes, there is no dominant or recessive but a melding expression of the genes that come together. However, these genes (in the reproductive organs) can also be segregated (come apart separately) and be passed on separately to offspring.

Actually, the one-drop rule went further in stating that any black ancestry made someone black, regardless of how little that ancestry is.

Many often wonder how all the varieties or races of people could have come from the same original human ancestors. Well, in principle, that's no different than asking how children with different color hair (i.e., blond, brunette, brown, red) can come from the same parents who both have black hair.

Ultimately, we are all one, just variations of that oneness.

The author, Babu G. Ranganathan, has his bachelor's degree with concentrations in theology and biology and has been recognized for his writings on religion and science in the 24th edition of Marquis "Who's Who In The East." The author's articles may be accessed at www.religionscience.com.