Life on Mars no surprise 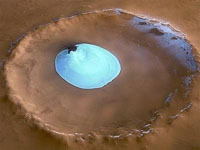 There's a good explanation for why life may exist on Mars. In the Earth's past there was powerful volcanic activity which could have easily spewed dirt and rocks containing microbes into outer space which not only could have eventually reached Mars but also ended up traveling in orbit through space that we now know as meteors. A Newsweek article of September 21, 1998, p.12 mentions exactly this possibility. "We think there's about 7 million tons of earth soil sitting on Mars", says scientist and evolutionist Kenneth Nealson. "You have to consider the possibility that if we find life on Mars, it could have come from the Earth" [Weingarten, T., Newsweek, September 21, 1998, p.12].

NASA knows all this but looking for life on other planets is a powerful way to motivate people to want their government to give more and more money to NASA. NASA, after all, is a business with hefty salaries at stake.

Just because the right conditions may exist to support life doesn't mean that life will evolve from non-living matter and, especially, not by chance.

Evolutionists must assume that the early earth atmosphere had no oxygen. But, then that would mean there was no ozone layer in the atmosphere to protect from harmful radiation that would destroy life or even any budding form of life. Ozone is made-up of oxygen. It's a Catch-22 situation for evolutions. In fact, there are numerous Catch-22 situations for evolutionists when it comes to the origin of life issue.

For more information, read the author's Internet article "Life on Mars Came From Earth." Just do a google search of the title to get to the article.

The author, Babu G. Ranganathan, has his bachelor's degree with concentrations in theology and biology and has been recognized for his writings on religion and science in the 24th edition of Marquis "Who's Who In The East." The author's articles may be accessed at www.religionscience.com