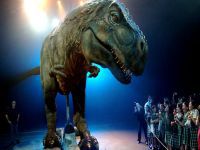 The paleontologist Alexander Kellner, a leading "dinosaur hunter" of Brazil, says that "in most cases, issues related to aspects of the lives of animals that were part of our planet's geological past have no answer." Member of the Brazilian Academy of Sciences and a professor at the University of Rio de Janeiro, his job is to assemble an infinite puzzle - without knowing where the pieces are and not knowing what the final image will be.

In pursuit of these pieces that help the understanding of how the planet was millions of years ago and how it became what it is today, researchers have discovered in the Triangulo Mineiro region, in Minas Gerais, a wealth of fossils that are leaving a more and more interesting picture of the planet. The latest discovery at the site indicates the existence of a sort of prehistoric supercrocodile extinct for 70 million years. It had a massive, toothy grin and a dog-like skull with long legs for galloping.

Three meters long, called the Pissarrachampsa, it terrorized the region. "Considering the fauna in this period in South America, it would include other crocodiles and dinosaurs as their possible prey," said Philip Montefeltro, who is a Brazilian researcher at McGill University in Canada. He recently published a study about the discovery of the Minas Gerais crocodile.

Montefeltro found that this type of species of crocodile had records not only in Triangulo Mineiro, but other species of the group were recorded in Sao Paulo and Argentina. "I began studies in 2008, when we were informed of the occurrence of fossils in Campina Verde (672 km from the city of Belo Horizonte). So far, we find basically this single species, ranging from fragments such as skulls, up to more complete specimens. Based on morphology, we can say that they were land carnivores, and possibly very active," he explains.

Professor Vicente de Paula Antunes Teixeira, University of Minas Gerais says that there were fossil records in the region since 1945, and it is estimated that only 1% of the historical material has been found so far. He recalls that one of the last dinosaur species found in Brazil was recorded in Uberaba, in 2004.

The Uberabatitan ribeiroi, 3.5 feet tall, lived 65 million years ago. "From March to September, we are always digging. There are many species of dinosaurs yet to discover in Uberaba," he says hopefully.

After being discovered, the fossil is sent to the laboratory for analysis. Then, there is a foam replica of the animal made and a drawing of how it would be. Then the material is cataloged and continues to exhibit in museums.

The promoter of Defense of the Public Inheritance of the State of Minas Gerais, Marcos Paulo de Souza Miranda, said crocodile fossils of Minas Gerais will be in the custody of state institutions after a study by researchers at Sao Paulo.

Today, the fossils of crocodiles can be found at the University of São Paulo in Ribeirão Preto. After the research of Montefeltro, the material in four years will return to the country of origin, thanks to an Adjustment of Conduct (TAC) signed between the Public Ministry of Minas Gerais and São Paulo University.