100 humpback whales come to mate in the Colombian Pacific 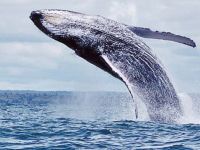 Animals migrate annually to the region. Bay Malaga is one of the places of the greatest breeding grounds

About 100 humpback whales made their annual migration to the warm waters of the Colombian Pacific Ocean to meet, mate and reproduce, experts that study the migration of these animals said on Sunday.

Some of them swim through the waters near the cubs, enormous like them, in the maritime territories of Gorgona, Juanchaco, Malaga Bay and Bahía Solano, the places that welcome this sort of mammalian species in their migration, which attracts thousands of tourists. "Malaga Bay is one of the largest places for reproduction of the species," the Director of the Uramba Bay Malaga Natural National Park declared to Efe Agency phone specialist, Nancy Murillo.

The park consists of a reserve with 47,094 kilometers located in the northwest extension of the port of Buena Ventura, in the Valle del Cauca region. It was created in August 2010 to conserve an ecosystem that promotes migration. Nancy pointed out that this park can be home to 22% of humpbacks during reproduction.

The nearly 100 whales arrived in less than two weeks to the waters of Colombia, in groups of five to six. They travel between 7,000 and 8,000 kilometers from the various channels of Patagonia and Antarctica, and remain in the Colombian Pacific waters for four months until November.

At birth, cubs measure 4.5 meters and weigh 700 to 1 thousand kilograms - while the adults are about 18 meters and 40 tons. They are nursed for about 12 months, and as they enter the second year, when their length is now about nine meters, they leave their mothers.