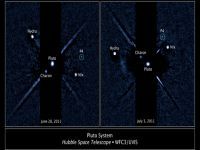 n June, the Hubble Telescope captured the image of the smallest moon of the dwarf planet

The distant dwarf planet Pluto until now hid a fourth moon. The U.S. space agency announced on Wednesday (20th), that the Hubble telescope found another moon around Pluto, which is 4.8 billion kilometres from Earth. Recently, Pluto was demoted in the planet category to that of dwarf planet.

The fourth moon astronomers discovered while investigating the possibility of having a ring dwarf planet (like Saturn), but they found another object circling Pluto.

P4 was first seen in a picture taken by Hubble on June 28. The discovery was confirmed by images on July 3 and July 18. The fourth moon of Pluto had not been seen in previous telescope images because they had shorter exposure time. An image taken in 2006 captured a very weak spot, which was ignored for being too dark.

It is believed that Pluto's moon system was formed by a collision between the dwarf planet and another celestial body of the same size in the early solar system history. The shock threw material that came together to found a family of satellites around Pluto.