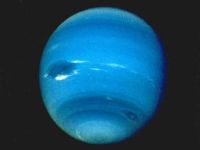 Neptune completes its first orbit since it was first discovered 165 years ago. To celebrate the "birthday" of the discovery, NASA released new images of the planet.

NASA has published photos taken with the Hubble Space Telescope in which you can see the blue tones of this planet that was discovered almost by accident.

Uranus was the research in the eighteenth century - the seventh planet of the solar system, until then considered the last - that led astronomers to believe that there could be another planet in the solar system even more distant.

The British astronomer William Herschel and his sister Caroline discovered Uranus in 1781, expanding the boundaries of the solar system, but soon realized that its orbit did not behave as predicted, according to the laws of Kepler and Newton.

In 1821, French astronomer Alexis Bouvard, studying Uranus, thought that perhaps another planet might be exerting some kind of attraction changing its movement, but there was a delay of 20 years before the first calculations were done.

The Frenchman Urbain Le Verrier and the Briton John Couch Adams, both mathematicians and astronomers, independently predicted where this "mysterious" planet was supposed to be by calculating how the gravity of a hypothetical object could affect the field of Uranus.

The decade of the planets

Le Verrier, who was the director of the Observatory of Paris, sent a note to the German astronomer, Johann Gottfried Galle, in which he discusses the possible location of the object. After two days of observation, on the 23rd of September 1846, finally Galle identified Neptune as a planet, to less than one degree from the position calculated by Adams and Le Verrier.

NASA considers the discovery one of the major astronomical achievements since the Newtonian theory of gravity, contributing to better understanding the universe. However, Galle was not the first to see Neptune.

In December 1612, the astronomer Galileo Galilei had the privilege of seeing it while watching Jupiter and its moons. However, as his notes reveal - which pointed in exactly the position of Neptune - the Italian scientist mistook it for a star.

The discovery of Neptune doubled the size of the known solar system as the planet is 4.5 billion miles from the sun, 30 times farther than Earth.

The nomenclature of the new planet was also the subject of dispute among scientists, who wanted to christen it with their own names. The scientific community has chosen Neptune, Roman god of the sea, a mythological name in line with the other planets.