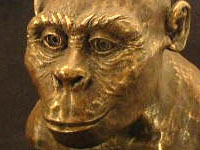 The reason why these new evolutionists believe this way is because they know that the fossil record is hotly disputed even among Neo-Darwinian evolutionists. Fossils that have been used to support human evolution, for example, have ultimately been found to be either hoaxes, non-human, or human, but not human and non-human. Furthermore, all forms of life in the fossil record and among living creatures are found complete and fully-formed (i.e. not partially-evolved), and these new evolutionists fully realize that partially-evolved species, with partially-evolved organs and biological systems, couldn't possibly survive in the real world.

Imagine a fish with part fins, part feet with fins evolving into feet. What survival benefit would there be? The fish couldn't use its fins or its feet, and there are no fossils showing such a creature existed. They only exist on automobile bumper stickers!

Both types of evolutionists admit that they cannot explain a gradualistic origin for life, although both believe that life originated by chance.

We do not hear about this war in the media, but it's real and more and more evolutionary scientists are converting from Neo-Darwinism to Punctuated Equilibrium every year by significant numbers. Of course, just like creation, both theories of evolution require faith, but creationism by an intelligent Cause is a rationally based faith.

The scientific fact is there are limits to biological change in nature. The genes already exist in all species for micro-evolution (or limited evolution such as varieties of dogs, cats, horses, cows, etc. which is possible in nature) but not macro-evolution (i.e. from worm to human).

Contrary to popular belief, there is no scientific evidence that random genetic mutations caused by unthinking environmental forces such as radiation can or will produce entirely new genes for entirely new traits. Mutations only produce more variations of already existing genes. For example, mutations in the gene(s) for human hair may change the gene(s) so that another type of human hair develops, but it'll still be human hair!

Because mutations are accidents in the genetic code caused by random environmental forces they're almost always harmful. They damage the genetic code similar to how the random energy from an earthquake damages a building. Even if a good mutation occurred for every good one there would be hundreds of harmful ones with the net effect, over time, being deleterious to the species, even causing extinction. Even "neutral" mutations will become harmful when enough of them accumulate and are passed on. Mutations may also trigger the duplication of already existing traits (i.e. extra fingers, extra toes, etc.) but this is not the same as the creation of new traits. Most biological changes are not from mutations but from new combinations of already existing genes.

What about "Junk DNA"? What about "Junk" DNA? The latest science shows that "Junk DNA" isn't junk after all! It's we who were ignorant of how useful these segments of DNA really are. Recent scientific research published in scientific journals such as Nature has revealed that the "non-coding" segments of DNA are useful, even essential, in regulating gene expression (how, when, and where in the body genes are expressed) and various intracellular activities. Just because these segments don't code for protein doesn't mean they're not useful or that they don't code for something else.

Many people have wrong ideas of how evolution is supposed to work. Physical traits and characteristics are determined and passed on by genes - not by what happens to our body parts. For example, if a woman were to lose her finger this wouldn't affect how many fingers her baby will have. Changing the color and texture of your hair will not affect the color and texture of your children's hair. So, even if an ape's muscles and bones changed so that it could walk upright it still would not be able to pass on this trait to its offspring. Only changes or mutations that occur in the genetic code of reproductive cells (i.e. sperm and egg) can be passed on to offspring, and that's how Neo-Darwinists believe and teach macro-evolution occurred through supposedly hundreds of millions of years.

Apes, by the way, are quite comfortable in how they walk just as humans are quite comfortable in how they walk. Even a slight change in the position of a muscle or bone would make either uncomfortable and would not be an advantage for survival. Most evolutionists believe that apes and humans evolved from a common ape-like ancestor, but there's no hard, undisputed evidence that humans evolved from either an ape or ape-like creature anymore than there is hard evidence that apes evolved from a four-legged dog-like creature.

Comparative genetic and biological similarities between species can much more logically be explained by a common Designer who designed similar functions for similar purposes in all the various forms of life.

Some evolutionists use similarities of traits between species as an argument for transitional forms. This is not a good argument because the traits they cite are complete, fully-formed, and fully functional, not in any true process of transition from one type of structure into another. What about the duck-billed platypus? It has traits belonging to both birds and mammals, but even evolutionists wouldn't argue that it's a transitional link between birds and mammals because of that!

The fossils show that all species came into existence as complete, fully-formed, fully functional. That can only happen by creation.

There is no real violation of church/state separation in teaching both because no one is being forced to believe in God's existence or any religion. Taxpayers on the both sides of the issue pay for public education. It is only fair that scientific arguments and evidence of both sides be presented, at the very least in public school textbooks. The issue is important because it affects people's lives, their values, philosophy, and worldview.

The author, Babu G. Ranganathan, has his bachelor's degree with concentrations in theology and biology and has been recognized for his writings on religion and science in the 24th edition of Marquis "Who's Who In The East". The author's articles may be accessed at www.religionscience.com