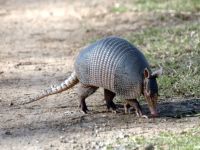 Some species used in the study are threatened with extinction, which hinders access to live specimens

A study of the wild animals that die run over on the roads in Sao Paulo has allowed researchers at the Universidade Estadual Paulista (UNESP), Botucatu campus, to understand the forms of transmission of important zoonoses (diseases transmitted from animal to human) for human health, such as Chagas disease and leishmaniasis.

In a few people, sores may develop on mucus membranes.The parasites damage the immune system by decreasing the numbers of disease-fighting cells.

Chagas disease is a tropical parasitic disease caused by the flagellate protozoan Trypanosoma cruzi. It is commonly transmitted to humans and other mammals by a blood-sucking insect vector.

In the early, acute stage, symptoms are mild and usually produce no more than local swelling at the site of infection. The initial acute phase is responsive to treatment, with 60-90% cure rates.

Antiparasitic treatments also appear to delay or prevent the development of disease symptoms during the chronic phase of the disease, but 20-40% of chronically infected individuals will still eventually develop life-threatening heart and digestive system disorders.

The most recognized marker of acute Chagas disease is called Romaña's sign, which includes swelling of the eyelids on the side of the face near the bite wound or where the bug feces were deposited or accidentally rubbed into the eye. Rarely, young children, or adults may die from the acute disease due to severe inflammation/infection of the heart muscle (myocarditis) or brain (meningoencephalitis). The acute phase also can be severe in people with weakened immune systems.

The researchers analyzed tissue samples from several species found run over. They found, for example, that armadillos are great hosts for parasites that cause leishmaniasis and Chagas disease. Already the armadillo-hen, besides being a host of pathogens that cause these two diseases, also house those that cause paracoccidioidomycosis, the most frequent systemic mycosis in Latin America.

Paracoccidioidomycosis is a chronic and progressive disease that mainly attacks the lungs, mucosa of the mouth and nose, with frequent spread to the lymph nodes, adrenal glands, and other viscera. This disease is also called South American Blastomycosis. Blastomycosis literally means "yeast disease,"

"The places where these animals live are common to man. In the case of the armadillo, many people use it in food and, if the meat is not cooked well, the person may become infected," explains lead researcher Virginia Bodelão Richini Pereira, the Center for Zoonoses Research Unesp in Botucatu, who leads the study.

A link has also been found between the reappearance of leprosy in the Southern United States with the armadillo.

According to Helio Langoni, veterinarian, supervisor of the study, some of the species studied are on the red list of threatened species by the International Union for Conservation of Nature and Natural Resources (IUCN, its acronym in English), which makes access to live specimens.

Deaths of wild animals in the form of roadkill is considered one of the biggest causes of the loss of wildlife, especially species at risk of extinction. The use of these animals for research is advantageous because there is no need for anesthesia and euthanasia.