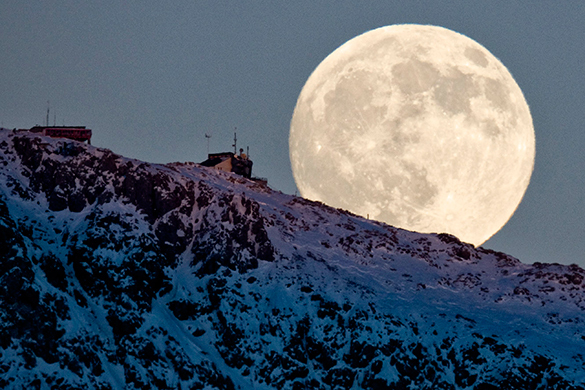 We are accustomed to the fact that the Moon is Earth's satellite. But will it always be the case? According to Gennady Raykunov, General Director of the Central Research Institute of Mechanical Engineering, the Moon may eventually leave the Earth's orbit and become an independent planet. In this case, the Earth will turn into a lifeless desert.

Raykunov says that the Moon may repeat the fate of Mercury, which supposedly was once a satellite of Venus, but then "flew" away. After that, the conditions on Venus became unfit for life, despite the fact that it is an Earth-like planet.

"The Moon, too, is moving away from Earth every year, and if no reverse process happens, it may leave its orbit," he made this statement for the air show in Le Bourget. 'Could earth follow the path of Venus and form conditions not suitable for existing life forms - aggressive atmosphere, great pressure, greenhouse effect, etc.?

Also read: Aliens forced Americans out from the Moon

According to the scientist, space exploration is currently being conducted that will help to determine whether the conditions will change life on our planet, whether it loses its natural satellite, and how to prevent the worst case scenario.

Gennady Raykunov has long been concerned with the fate of the Moon. Earlier, he called the satellite the "seventh continent" and stressed the need to create a continuously operating base on it, whose members would conduct research and use the resources of the celestial body.

Now the Moon moves around Earth in an orbit close to the elliptical, counter-clockwise (as viewed from the North Pole) with an average speed of 1.02 kilometers per second. In fact, the movement of our natural satellite is a fairly complex process influenced by various disturbances caused by the attraction of the sun, planets and the Earth's oblate shape. How likely is the scenario proposed by Raykunov?

Sergei Popov, a researcher with the State Astronomical Institute of the Moscow State University of Sternberg (SAI), confirmed that the Moon is really moving away from Earth, but very slowly - the removal rate is approximately 38 millimeters per year. "In several billion years period the Moon will rise by 150 percent, and that's all," said Popov. "The Moon cannot completely go away. It does not have energy resources to escape."

Vladimir Surdin, another employee of SAI, added that even this process of removing the Moon from Earth will not last forever: eventually the satellite will begin approaching the planet again.

According to Surdin, under the influence of solar tides, rotational speed of the planet is gradually reduced, and the rate of removal of the satellite will gradually decrease. After approximately five billion years the lunar orbit radius would reach a maximum value - 463 thousand kilometers, and the duration of Earth days would increase to 870 hours.

"The statement "The Moon could leave Earth's orbit and become a planet "is wrong," Surdin said. " Solar tides will continue to inhibit the Earth. But now the Moon will outstrip the Earth's rotation, and tidal friction will slow down its motion. As a result, the Moon will approach the Earth, albeit very slowly, because the force of solar tides is low."

But even if we imagine that the Moon is no longer a satellite of the Earth, it still will not turn our planet into a lifeless resemblance of Venus, scientists say. Alexander Bazilevsky, head of the Laboratory of Comparative Planetology of the Institute of Geochemistry and Analytical Chemistry RAS named after Vernadsky, commented: "The conditions on the surface of the Moon have little effect on Earth. There will be no ebbs and tides, and the nights will be moonless. We will survive."

Colleagues of Raykunov do not fully agree with his assertion to the effect that Mercury was once a companion of Venus. "The calculations show that it is possible, however, it does not prove that it was the case," said Bazilevsky. He added that the development of Earth and Venus cannot be the same as the Venusian atmosphere is enriched with heavy isotope of hydrogen - deuterium.

"This could be due to the fact that Venus once had a relatively large amount of water. During the decomposition of water in the upper atmosphere into hydrogen and oxygen, light hydrogen isotope escaped into the space faster than the heavy ones, causing the observed anomaly," he said. "Yet, it is not a given that on the surface of Venus there was liquid water and not vapor in the atmosphere, that is, it could not be as hot there at the time as it is now."

In short, we still have nothing to fear, and earthlings will be able to walk under the Moon for at least five billion years.