Asteroid passes by Earth on Monday

According to NASA, the celestial body is small and poses no risk to the planet 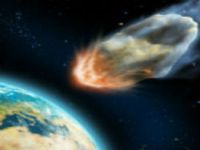 NASA will collect asteroid samples to help decipher the Solar System. A small asteroid discovered recently by NASA will approach Earth on Monday (27th), but there is no cause for alarm, says the American space agency.

The NASA department that handles this type of occurrence said on Friday (24th) that the space rock - identified by the acronym MD 2011 - will pass at 12,000 kilometers from the Earth's surface, near the southern Atlantic Ocean, at approximately 1:14 p.m. EDT (1714 GMT).

The asteroid's upcoming Earth flyby will be close, but not a record for passing asteroids. The record is currently held by the asteroid 2011 CQ1, which came within 5,471 kilometers of Earth on February 4 of this year.

Next year, a small asteroid will come even closer to 5,500 kilometers from the planet.

The MD 2011 is about 10 meters long and was discovered this week by telescopes in New Mexico. According to scientists, asteroids this size pass by the Earth once every six years. Asteroids less than 25 m break up in Earth's atmosphere and do not cause ground damage.

If 2011 MD did strike the planet, it would break up in the atmosphere and give an amazing display of fireballs and meteors. As it turns out, it will sail harmlessly by, 32 times closer than the moon, and closer than some geosynchronous satellites.

"It will get so close to the Earth that the asteroid's trajectory will be altered by our planet's gravitational field."

In its passage by the Earth, the asteroid should be bright enough to be obeserved by medium-sized telescopes.