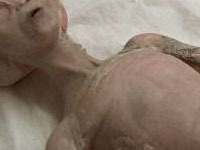 A team of anthropologists found a mysterious burial in the jungle near the city of Kigali Rwanda (Central Africa). The remains belong to gigantic creatures that bear little resemblance to humans. Head of research group believes that they could be visitors from another planet who died as a result of a catastrophe.

According to the scientists, they were buried at least 500 years ago. At first, researchers thought that they came across the remains of ancient settlements, but no signs of human life have been found nearby.

The 40 communal graves had approximately 200 bodies in them, all perfectly preserved. The creatures were tall - approximately 7 feet. Their heads were disproportionately large and they had no mouth, nose or eyes.

The anthropologists believe that the creatures were members of an alien landing, possibly destroyed by some terrestrial virus to which they had no immunity. However, no traces of the landing of the spacecraft or its fragments were discovered.

Part II of the article

This is not the first such finding. In the summer of 1937 a group of Chinese scientists led by Professor Chi Putei surveyed the caves of Mount Bayan-Kara-Ula. Inside they found skeletons with excessively large heads and puny bodies. Nearby there were 176 stone plates. In the center of each plate there was a hole from which a spiral groove spread out to the perimeter with some characters on it.

In addition, the cave walls were covered with pictures of the rising sun, moon and stars, with many painted dots or small items, slowly approaching the mountains and the earth's surface.

Experts in deciphering ancient written characters have been puzzled over the disclosure of the secret spirals from the cave Bayan-Kara-Ula for two decades. Finally, the professor of Beijing University Zum Umniu deciphered several inscriptions.

The grooved letters narrated that approximately 12 thousand years ago some flying objects crashed in these mountains. Chinese archaeologists found a mention of the peoples who lived in the mountainous caves of Bayan-Kara-Ula.

A corpse of another "alien" was found by Turkish cavers. A mummy of the ice age was resting in a sarcophagus made of crystalline material. The height of the humanoid male creature did not exceed 1 meter 20 centimeters, his skin was light green, and he had large transparent wings on his sides.

According to the researchers, in spite of the unusual appearance the creature looked more like a person rather than an animal. His nose, lips, ears, hands, feet, nails, were very similar to human. Only his eyes were very different, three times bigger than those of a human, and colorless, like reptile's eyes.

Not that long ago in one of the ancient Egyptian tombs a mummy of a man 2.5 meters tall was found. It had no nose or ears, and its mouth was very wide and had no tongue.

According to archaeologist Gaston de Villars, the age of the Mummy is approximately 4 thousand years. It was buried as an Egyptian nobleman - carefully mummified and surrounded by servants, food and art objects designed for the afterlife. However, as it was discovered, not all objects around the finding belong to the Egyptian or even Earth's culture. For example, among the finds was a round polished metal disk covered with strange characters, a costume made of metal with the remnants of something resembling plastic shoes, and many stone tablets filled with images of stars, planets and strange machines. The Shrine where a strange mummy was found also looks unusual. The burial was made of the material unknown in antiquity. The stone was literally carved from the rock so that the walls were smooth, like polished marble. It looked as if it was cut by a laser. Incidentally, the stone's surface was fused. The tomb was decorated with a substance resembling lead.

However, the "alien" theory is not the only one. According to some researchers, the "giants" and "dwarfs" could be a mere side branch of humanity that once lived on Earth, but for some reason became extinct.