E.coli outbreak: Why the scientific community is terrified 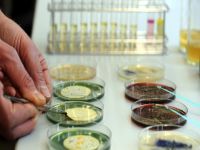 A new and deadly multi-resistant strain of E.coli suddenly appears, resistant to no less than eight families of anti-biotics. Was this the result of Mother Nature herself, or can we see the evil hand of Man in this? We examine the facts and the possible implications...If it was man-made it is scary. If it is a natural development, it is terrifying.

First and foremost, the need for a responsible media to report the facts and not create panic so as to sell copies. In its infinite wisdom the international media has allowed itself to get into a situation where many of the material that is written is by trainee journalists (unpaid) who get a contract if and when they uncover something spicy.

And by spicy, I mean sexed up. However the result of irresponsible finger-pointing we saw in Germany, when the outbreak started, occasioning a loss of 200 million Euro a week for Spain's farmers. What are the facts?

The facts are that a small percentage of those infected with the new strain of E.coli are hospitalised (5%) and of these, 3 to 5% die. While E.coli and human beings co-exist happily most of the time (it is a bacteria present in the intestines of mammals, including humans), the complication happens when different strains occur. Among these in this case is EHEC (Entero-haemorrhagic E.coli) and from this, shigatoxins or veracitotoxins can be produced and these can lead to a complication with haemorrhagic symptoms called HUS (haemo-uremic syndrome) as the infection spreads through the body affecting organs and the blood vessels. These are the more severe cases, and are a very small minority of those infected.

What is abnormal about this case?

Scientists are very worried about this particular strain (0104:H4) because it is multi-resistant. In fact, it is so multi-resistant that it would appear to have been created in a laboratory, being immune to no less than eight types of antibiotics. If this is the result of natural mutation, it is even more scary because it seems to have the capacity to produce enzymes called Extended-Spectrum Beta-Lactamase (ESBL) which allow the bacteria to resist the type of powerful antibiotics usually used in hospitals.

It is, therefore, a deadly super-bacteria and behaves in the same way as many biological weapons developed in military laboratories around the world.

It is impossible to say. So far the finger has been pointed at Spanish cucumbers (wrongly and irresponsibly, they are not the source) and at a farm in Germany growing bean sprouts. Strangely, this has been identified as the source, yet the tests came back negative. Why the attempt to sweep everything under the carpet without concrete evidence?

The conspiracy theorists will say it is further proof that "they" are trying to poison us all in "their" quest to reduce the world's population to one billion people. The problem with this theory is that since our world is based upon an economic model which thrives on selling products, it does not make much sense to kill all the clients.

We are therefore faced with two possibilities: either it was man-made (in which case it is frightening. Was it a biological weapon which was hijacked? Was it produced by terrorists wishing to destroy the economy of a country that supplies agricultural produce to the European Union...which country?) or it developed naturally (in which case it is even more frightening).

The relative weakness of the strain (a death rate of 3 to 5% of the 5% of those infected) would point towards the fact that it is not a biological weapon, however the strain could have been handled by terrorists. That, or is it the result of feeding herbivorous animals with pulverised protein from other animals, such as was the case with Bovine Spongiform Encephalopathy (BSE, Mad Cow Disease)?

When will we learn that cows eat grass, lions eat meat and humans are supposed to be omnivorous? When will we learn that by producing super-federal states like the European Union, strains are placed on the food production system which lead to unnatural practices in providing for 500 million people? And these strains lead to the prevalence of...strains of bacteria as these unnatural practices are implemented.

Didn't everyone get along just fine when each country provided for itself instead of first being paid not to produce then passing production over to the handful of rich countries that run the EU?

And to conclude, however much Brussels rants and raves, Russia was and is right to ban EU vegetable produce. Who wants to be poisoned? And who can say it is safe until they find a source with positive test results? Why are they trying to sweep it all under the carpet? Or is there something else behind this that we do not know?