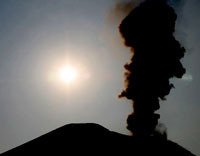 Mass awakening of volcanoes in the recent years has made scientists wreck their brains over the possible causes of such increased activity. Many geophysicists believe that such activity may increase because of the interaction of the Earth with other celestial bodies, such as the Sun or the giant planets Saturn and Jupiter.

Even the skeptics do not doubt that our planet is going through a peak of volcanic activity. Indeed, for the second consecutive year, these fire-breathing monsters are being felt in different regions of the planet. Even seemingly forever dormant volcanoes are coming to life. In addition, scientists expect the emergence of new volcanoes in places where they did not exist before.

The peak of volcanic activity also coincided with the activation of other processes in Earth's crust that resulted in the succession of powerful earthquakes. Although they happened in places with the increased seismic activity, this is not very comforting. Since volcanoes and earthquakes are usually associated with one another, it becomes clear that something is happening to the planet.

First we need to figure out what hidden mechanism causes a volcanic eruption. Scientists have known for a long time that mantle convection causes volcano eruptions. However, this knowledge does not answer the question why at one time volcanoes are active, and in other times dormant.

The ancient Greeks answered this question without any hesitation - the volcano wakes up when the god Hephaestus, the blacksmith, gets rush defense orders from Zeus (or some other deity). Then he descends into his underground forge under a mountain, kindles the hearth, and gets to work. As a result, people have to "admire" the smoke rising from the underground oven, splashing hot metal and sparks flying from under the hammer of Cyclops. Hellenes were convinced that the volcano wakes up just when Zeus needs something from Hephaestus.

Contemporary scholars are not happy with such an explanation. However, it is interesting that the theories attempting to explain the sudden awakening of the volcanic activity have certain references to the king of gods.

Now, scientists often say that the volcanism is a process that can be activated not only by Earth, but also space reasons, and, more precisely, the interaction of the planet with different objects from space. In the late 19th century geologist E. Kluge and his colleagues noticed a rhythmic nature of the eruptions. According to their observations, volcanoes do not wake up "suddenly" and there is certain regularity to this process. That is, it makes sense to talk about certain cycles of volcanic activity.

In the early twentieth century, Professor Bogolepov drew attention to another interesting fact - a wave of volcanic activity is particularly pronounced in the equatorial zone. This interested the scientist, and he gathered a curious collection of evidence showing that volcanic activity in most cases was linked to the general geophysical perturbations on the planet associated with the impact of any large celestial body. In the 1970's and 1980's, scientists calculated that the peaks of activity often coincide with the periods of the excited state of the sun (often called "flares").

In our time, researcher Fedorov showed that the distribution of volcanoes is subject to strict latitudinal zonation (i.e., fire-breathing mountains are located strictly at certain latitudes), and their behavior is determined by the influence of gravitational fields of the Sun and the Moon. In addition, the work of Vladimir Shirokov allowed establishing the dependence between major volcanic eruptions and bursts of solar activity. Khain and Khalilov noticed that the reaction of the volcanoes in rift zones (areas where the mantle material is released to the surface, located on the ocean floor) and on continental margins is the opposite - if one falls asleep, another one wakes up. Most interestingly, it is also tied to the cycles of solar activity.

All this suggests that volcanoes are often highly sensitive to any external disturbances which arise as a result of solar activity, as well as the activity of other stars and even planets. Statistics, taking into account the terms of the beginning of eruptions in the period from 1960 to 2009 suggests that, apparently, the very rotation of the sun around its axis (and, judging by the observations of sunspots, this period is approximately 27 days) generates a short-period fluctuations in volcanic activity. It is interesting that most of this activity occurs in one or two days before the passage of the central meridian of the Sun.

However, volcanic activity can be extinguished in the interaction of the planet with the gas giants Saturn and Jupiter. It was observed that these planets at the time of passage of perihelion (the closest to the center of the solar point of the orbit of a celestial body), they flew past the Earth, slowing the movement of magma in its depths. This, in turn, leads to a decrease in the number of eruptions. For example, it was found that Saturn, being at perihelion, reduces their number from 25-26 to 22 per year. Jupiter slows volcanic activity more effectively (which is not surprising, as it is closer to Earth).

The Sun activates volcanoes, and giant planets inhibit their activity. Interestingly, the Greeks, apparently, were mistaken - the real Zeus (i.e., Jupiter) is not really rushing Hephaestus, but ordering him to slow down.

For the volcanic and other natural processes, the dynamics of the barycenter (i.e., center of the mass) of the solar system is very important. It is known to be normally located approximately a million miles from the center of the Sun, but due to the reversal of the giant planets it has to move constantly from its normal position to its outer layers, and then come back. Calculations showed that such rhythms of the barycenter are cyclical and each cycle lasts for 179 years.

The maximum volcanic activity is observed just when the centroid passes through perihelion and aphelion. The perihelion here means the point when the barycenter is as close to the center of the Sun as possible, and the aphelion is the point of the maximum distance from the Sun. According to the data on the eruptions which occurred during the period from 1800 through 2009, in such critical moments for the barycenter the volcanic activity is always much stronger. Indeed, without exception, all the largest eruptions (like the explosion of the volcano Krakatoa in 1883) occurred at the time when the barycenter either moves away from the center of the Sun or approaches it.

The shifts of the barycenter are caused either by the approximation of a giant planet to the Sun or it moving away from it. It turns out that Jupiter and Saturn in this case, on the contrary, contribute to the increased volcanic activity. So, as you can see, the interaction of Zeus and Hephaestus is twofold - the king of the gods can give the latter orders either to slow down or hurry up. Also, apparently, the displacement of the barycenter may also be affected by the movement of the other two gas giants, Uranus and Neptune. However, scientists do not know much about this.

The volcanic activity is dependent on many factors. At the same time, scientists cannot exactly tell whether all of these interactions affect it, because to this day they are unable to observe the processes in the mantle and core. It turns out that the mechanism is revealed from one side only, and the other side is still hidden from scholars.

However, in the absence of a clarification of the specific dependence of mantle and nuclear processes on external influences, it cannot be argued that they affect volcanic activity. After all, this may be a mere coincidence (as both in science and in life it is, unfortunately, often the case). Therefore, scientists should always check all the facts in isolation and not be limited to observation of their correlation as this correlation may only be a wishful thinking.

However, now one thing is clear - the god Hephaestus gets plenty of orders not only from Zeus, but from his other colleagues as well, and they are all urgent. It seems that he is doing his best to fulfill them.