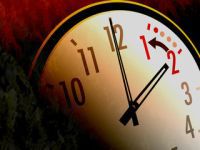 Experiments with metamaterials simulates the beginning of the universe and suggests that time travel is likely a quantum impossibility...

You may want to delay your plans a little more to build that time machine. Laboratory scientists have developed a sort of mini Big Bang suggesting that, ultimately, time travel is an unlikely possibility.

In a new study, Igor Smolyaninov and Yu-Ju Hung, University of Maryland, simulated the birth of the universe using advanced materials that allow the bending of light in unusual ways. The device created is based on the idea that "time's arrow," pointing forward, cannot bend over backwards to undo events that have already occurred.

For the time being, time travel is still not possible in real life and, according to Smolyaninov, such material suggests that this will never be possible.

The new Big Bang simulator is tiny - its width is only a few fractions of centimeters (20 micrometers). It was constructed from alternating strips of plastic gold and fitted so as to create a metamaterial, a substance produced artificially for the manipulation of light.

In recent years, researchers have been using metamaterials to create devices previously only possible in fiction, like invisible cloaks and "super-lenses" that allow scientists to "see" structures smaller than the wavelengths of visible light.

Metamaterials have also aroused the interest of astronomers who recently used the alien substances to create artificial black holes and multiuniverse simulators.

According Smolyaninov and Hung, the material developed by them is a reasonable representation of our universe, particularly the early universe at the time of Big Bang - around 13.7 billion years ago.

Due to the unique way such material causes light to bend, the equations that describe the passage of a particle through time are similar to those that describe the movement of photons and of similar quantum particles called plasmons - created from waves of free electrons - through the material.

The universe is too cluttered to allow the reversal of time?

For the experiment, the scientists used a green laser beam to cause an event similar to the Big Bang in the metamaterial. The laser caused the atoms to generate bursts of gold plasmons.

Such plasmons radiated outwards from a single point, just as scientists imagine that the particles would have done after the Big Bang. The researchers found that the trajectory of plasmons became increasingly disorganized as they strayed. The finding is consistent with the second law of thermodynamics, which says - excluding any kind of intervention - the systems have the tendency to become more disordered with the passage of time, a phenomenon known as entropy.

In the toy model, a complete revolution of a plasmon exactly along the same path would be equivalent to time travel. But since the plasmon is lost in such a way - due in part to entropy - it wouldn't be possible to make the complete turn.

The result, described in a paper published this month, suggests that the particles in our universe may also be unable to move backward in time.

Smolyaninov admits that the experiment is far from perfect: "I'm not sure how much of it can be applied to real life."

Andreas Albrecht, a cosmologist at the University of California who was not part of the study, has doubts that such a metamaterial is a sufficiently accurate representation of the early universe.

For Albrecht, the Big Bang simulator created by the researchers is an interesting achievement, but he does not believe that it will teach something about the universe that was not already known from empirical data or models based on equations and computer simulations.

Time travel may be imperceptible

Although the new experiment - and our daily experience - apparently eliminates the possibility of time travel, there are still many questions about the universe, so physicists can imagine scenarios in which time travel is possible.

For example, the laws of physics may vary depending on where one finds oneself in the cosmos, and maybe the Earth is one way in the universe where there is an increase of entropy, which might make time travel impossible to take place.

"Perhaps life itself is present in this way where there exists an increase of entropy, since we need the existence of the arrow of time," Albrecht said. As Albert Einstein once quipped, "Time exists so everything does not happen all at once."

Moreover, Albrecht says he also could imagine a universe where entropy occurs in increasing and decreasing cycles.

If entropy is not consistent with the hypothetical universe, he says that then the arrow of time could go backwards and events like a broken cup could become whole again, or reverse aging in humans would not only be possible, but natural.

The inhabitants of such a universe probably would not even realize such inadequacies.

"If that happens, we simply would change our idea about what is past and what is the future, without noticing anything special."