Humans were made for walking 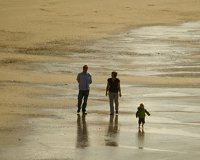 Various scientific studies have examined the mechanics of human locomotion. It looks as though mankind was made with an extremely efficient walking "gear." Can evolution be legitimately credited with the unique human leg ingenuity that this efficiency requires, or does the evidence better fit a more intelligent source?

A recent study found that human locomotion has two gears: walking and running. When walking, a large proportion of energy transfer between steps occurs at the hip joint. The study, published in the journal Interface, showed that when the speed reaches two meters per second, the body transitions to a running gear. When running, more of the energy transfer occurs at the ankle joint.

In short, "changing from walking to running resulted in a significant (p = 0.02) shift in power production from the hip to the ankle," the North Carolina State University researchers stated in the technical article. They measured the energy output of ten people walking or running at various speeds on a level treadmill.

A separate 2010 study found that walking with heels-first is more efficient than stepping onto the balls of the feet. And, generally speaking, walking is a very efficient process in man. David Carrier, senior author of that study, said in a University of Utah press release, "Our study shows that the heel-down posture increases the economy of walking but not the economy of running." Running is equally efficient whether heel-first or toe-first.

One 2000 Nature article stated, "At present, however, the fossil record offers little information about the origin of bipedalism [walking on two legs], and despite nearly a century of research on existing fossils and comparative anatomy, there is still no consensus concerning the mode of locomotion that preceded bipedalism."

Similarly, a 2003 study explained that the evolutionary transition from four-footed to two-legged locomotion should be simple, but the data don't fit this presumption. The authors wrote in The Journal of Experimental Biology, "However, experimental studies of locomotion in humans and nonhuman primates have shown that the evolution of bipedalism involved a much more complex series of transitions."

And the fact that so many "transitions," each one very specified, were required before the efficiency of walking could even begin to pay metabolic dividends argues against their evolution by natural selection. In other words, the anatomical structures that supposedly resulted from all these "transitions" are actually intended design features.

Among those features are the "unusual structure of our foot," including its "big heel," and the length and straightforward orientation of the big toe, as well as human hip bones, which aim the knees forward in the direction toward which humans walk.

Without all of the bones, ligaments, tendons, and muscles properly integrated with one another all at the same time, it would be impossible to walk like a man-let alone to switch to a whole separate running gear. Evolutionists must put their faith in imaginary physical "transitions" that could not work because they would require long time spans of creatures with not-yet-formed leg structures that would render any such animal immobile. Those who "walk humbly with [their] God," however, can rely on the data showing that the mechanics of walking were well-created.