Moscow to build new metro lines in the air 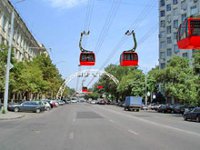 A group of specialists from the Moscow State Automobile and Road Technical University have developed a project of a new type of transport - the air metro. According to them, cable ways are much faster, more comfortable and environment-friendly than conventional types of transportation, the Moskovsky Komsomolets newspaper said.

The developers of the project believe that Moscow has virtually exhausted all possible transport resources. It is still possible, however, to build cable ways in the city, similarly to those that already exist in Venezuela, Barcelona, Hong Kong and many other cities of the world.

This type of transport isf environment-friendly, noiseless and safe. It does not require municipal service and matches the city atmosphere perfectly. The altitudes of cable ways may vary, which will make it possible to round buildings, overcome rivers, railways and many other obstacles. Cable way stations will also serve as small commercial outlets.

The altitude for building cable ways can be different. On plain territories it usually makes up 10-12 meters above the ground. The construction is quick and less expensive than building an asphalt road. The power consumption is very moderate too - about 200 kilowatts will be required for one kilometer of cables.

Cable ways will be able to transport both passengers and cars - to parking lots and back, for example. The current speed of cable ways, which makes up 15-20 kilometers per hour, can be increased twice. A special technology used in the system of cables will eliminate swinging. A ticket for a ride on a cable way will cost approximately 25 rubles (90 cents).

"It would be good to connect terminal points of the Moscow subway with cable ways in the first place. People would thus be able to switch subway lines and they would not have to travel downtown for it. All remote areas of Moscow could be connected with the subway by cable ways too. All this will let us reduce traffic on the roads," specialists of the University said.