Russians may be the first to reach the Sun 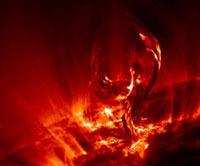 Despite the fact that the Sun is our "native" star, to date no one has been able to examine it at a close range. Now helio-physicists of several countries are working to create devices that would allow them to approach the sun as close as possible and study the processes taking place there. It is possible that the first solar probe will be launched in Russia.

The idea of ​​sending a spacecraft to the sun originated in the Russian scientific community in the 1970 (under Brezhnev). It involved not a manned spacecraft, but rather a research probe that was to be sent to the Sun. At the time, however, this project seemed technically unfeasible. The real work on the device able to explore the Sun from an extremely small distance (30-40 solar radii), was commenced by the Russian scientists only in 2005. Later, the project was included in the federal space program.

Now experts of the Institute of Terrestrial Magnetism, Ionosphere and Radio Wave Propagation named after Pushkov (IZMIRAN), Physics Institute of the Academy of Sciences (FIAN) and other research institutions along with their colleagues from the "Space Agency" are working on the completion of the project of Interhelioprobe device. By the end of the year the NGO named after Lavochkin will complete design sketches to determine the composition of the research equipment and the appearance of the "solar spy" planned to be "delivered" in the space at the top of the rocket Soyuz-2. It is assumed that 17 units will be housed on board of the domestic probe. Since their combined weight must not exceed 120 kilograms, specialists will use the most advanced technology and materials for the construction of the equipment.

The Director of the Institute for Space Studies with the Russian Academy of Sciences Lev Zelyony did not rule out that the unit will be pulled even lower, at the height of 10-12 solar radii. However, in this case, he added, there is not only a danger of overheating, but also a threat of evaporation of the screen under the sunlight, which can cause errors in measurement. Therefore, one of the priorities is the development of a heat shield capable of withstanding temperatures up to 600 degrees Celsius. As reported by the staff of FIAN, the heat shield will consist of alloys of tungsten, molybdenum and other refractory materials.

What kind of information do the scientists expect to obtain?

"Approaching the sun is necessary in order to study such phenomenon as solar flares," says Vladimir Kuznetsov, director of IZMIRAN. "An essential part of the program will involve observations of the area out of the ecliptic plane of the sun, where Earth and all planets are located. In these areas the reversal of the magnetic fields occurs, which is important for studying the solar cycle and the solar dynamo, because as of today we still are not able to predict the beginning and the amplitude of these cycles very well."

According to Kuznetsov, if we learn to predict solar activity and the duration of solar cycles, it will allow to lessen the impact of Earth and near-Earth environment, as it has long been proven that they significantly affect nearly all natural and technological processes, as well as human activity.

In addition, the scientist said, if we can explore the heliosphere, and especially its interaction with man-made structures, we will learn to build thermal and radiation protection in space that would make spacewalks easier, because sooner or later humanity will fly to Mars and other planets.

Apart from the Russian project, there are currently also two similar projects abroad. European scientists are working on Solar Orbiter apparatus meant to study the Sun from a distance of 60 solar radii (this is slightly closer than the orbit of Mercury). The American Solar Probe will be approaching the Sun at a distance of only 8.5 radii from its surface.

However, Solar Orbiter will launch in 2017, and the Solar Probe - in 2018. As for the date of the launch of the Russian device, the experts believe it will occur in 2015. Russia has a real chance to be ahead of the rest of the world in this space endeavor.