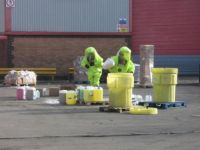 So, after everyone pointed the finger at the Spanish and their cucumbers, after tonnes of the crop were destroyed, after Spain's agriculture lost its reputation and thousands of jobs, now they decide the source of the German E.coli outbreak was not Spain after all. It's a bit late now, isn't it? Then what was the source? Terrorism?

The form of E.coli sweeping across northern Germany is as serious as it is rare. 16 people have died - 15 in Germany and one in Sweden; 1,169 people are infected by EHEC (enterohaemorrhagic E.coli) in Germany and 470 of these with the most severe form of this illness (HUS). Other cases have been reported in Sweden, Denmark, the Netherlands, the UK, Austria, Spain, Switzerland and Poland. There are already 41 people ill in Sweden, 15 with HUS. Other HUS cases have been reported in Denmark (6), the Netherlands (3) and the UK (2).

The serious development is Haemolytic-uremic Syndrome, or HUS. A strain of the E.coli bacteria (Escherichia coli), called enterohaemorrhagic E.coli, or EHEC, produces toxins denominated STEC (Shigatoxin-producing E.coli) or VTEC (verocytotoxin-producing E.coli) which in turn can cause a bacterial infection (HUS) which can lead to kidney failure or failure of the central nervous system. It has a 5 per cent mortality rate.

After the finger was so recklessly and irresponsibly pointed at the Spanish, tests now reveal that Spanish cucumbers were not the source of the outbreak. Understandably, the Spanish authorities now threaten to take legal action because the crisis has called the export federation 200 million Euros in lost revenue per week.

Avoid eating fruit and vegetables altogether? Some experts claim that washing fruit and vegetables is a good way to remove bacteria (after all, that is no more than common sense). However, the question is that others state that the bacterial infection has travelled up root systems and entered the flesh of the vegetables, thought to be restricted to cucumbers, tomatoes, lettuces and aubergines/brinjal/eggplant. Cooking the vegetables at 70ºC or over kills the E.coli but who is going to boil a lettuce?

As usual our health authorities, as was the case with Influenza AH1N1, are woefully inadequate. Back then, they stood back, did nothing and informed us that the pandemic was reaching phase 2, then 3 and so on until it reached phase 6. Just imagine if it had been more pathogenic. Now with this, we are told to wash vegetables and avoid eating lettuces, tomatoes and cucumbers, particularly in northern Germany. Great! What next? Wait for it to appear where we live?

In today's scientific age, where six SEALS can take out the world's most wanted man ten years after he disappeared in a silent attack using four choppers, one of which crashes on cue, are we really restricted to unfounded gossip along the lines "Hey it must be those Spanish cucumbers, what? Never trust a chap with a moustache, eh?"

So, we may as well say it was a terrorist attack and they aren't telling us...