Bacteria may be responsible for the formation of hail and snow 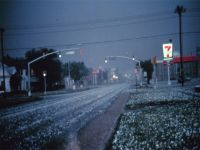 Living bacteria that gets whipped up into the sky may be just the spark needed for rain, snow and even hailstorms, research now finds. In June 2010, a hailstorm with stones of more than five centimeters in diameter in the state of Montana, United States, led to a unique singular discovery: bacteria may be responsible for the formation of rain, snow and hail.

"I was on the campus of the University [State of Montana in Bozeman, in the United States] when these huge stones began to fall, breaking windows. We collected them and analyzed what existed in their center and we found large amounts of bacteria," explained Alexander Michaud, during a teleconference call to present the research at the 111th General Meeting of the American Society for Microbiology, which ends on Tuesday (24th) in New Orleans, United States.

The ice cubes were divided into four layers, melted down and their composition was analyzed separately. The closer Michaud and his colleagues got near the nucleus of the hail, the more bacteria there was. "They were alive, although it is not necessary for this to happen so they could form the hail," said Brent Christner, Louisiana State University, who also participated in the work.

Their presence in the atmospheric region from which the hail is formed is an indicator that they may be one of those responsible for its formation. "What we can say now is that the bacteria had a part in creating this hail. Now how important is it on a global scale is not yet known, " said Christner.

Normally, minerals and other particulates were considered responsible for agglutinating the particles of water present in the clouds until they are large enough to turn into rain, snow or sleet. For this to happen, however, the water must be at a temperature much lower than usually exists in the clouds.

In other words: in theory the minerals should not be responsible for creating the nuclei that give rise to rain, ice and hail. The key may lie in bacteria. "We know of only 1% of microbes are able to create these nuclei. We still need to discover about the remaining 99%," explained Christner.

The new research shows that a large variety of bacteria, and even fungi, diatoms and algae, are found in the clouds and can be used as precipitation starters, a growing field of study called bioprecipitation.

The plant pathogen Psuedomonas syringae was studied and plays an important role in snow formation all over the world, including Antarctica, where there are few plants. Very good at creating ice at temperatures above the normal freezing point of water, the pathogen is equipped with a special substance that binds water molecules in an orderly arrangement, and in this way can more easily form ice particles.

Author`s name Oksana Orlovskaya
*
14:14
Kyiv's largest thermal power plant damaged in Russia's rocket attack
19:39
Putin pays visit to Crimean Bridge two months after explosion
18:32
Russia strikes Ukraine's infrastructure facilities for 8th time
16:11
Retired US intelligence officer: Russia will win in Ukraine in summer of 2023
15:56
British mercenary: Winter cold in Ukraine came as a shock to us
15:31
Moscow responds to EU's decision to cap prices on Russian oil
14:52
As many as 2,500 dead seals found on the coast of Caspian Sea in Dagestan
14:11
Three household gas explosions occur in different parts of Russia in one day
23:35
Putin keeps his promise and presents impressive gift to China
16:30
Armed Forces of Ukraine strike transformer substation in Zaporozhye
UK and USA could be part of drone attacks on Russian military airfields