The Hottest Women by RIA Novosti 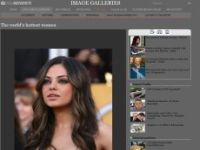 The English version of RIA Novosti website is advertised through obscene headlines. Experts believe that this way the publication can attract Internet users, but it will have no effect on the number of regular visitors.

There are not that many media outlets in Russia known to foreign audiences. The short list includes TV channel Russia Today, several versions of the site RIA Novosti, The Moscow Times, and the English site of Pravda.ru. This makes it even more comforting to realize that Pravda.ru is interesting not only for foreign audiences but also Russian media outlets, first of all, the above-mentioned RIA Novosti.

An example of this attention is an article published by one of the applications produced by the news agency. It has a simple and unpretentious title: "The English version of Pravda.ru is spreading viruses." For some reason RIA Novosti decided to convey this deplorable "fact" to their Russian-speaking audience. The readers of the English version of Pravda.ru, according to the publication, still have no idea about a terrible danger they were exposed to.

However, after reading the text of the article it becomes clear that there was no threat. There were some technical issues that have been promptly addressed. At any rate, there were not even close to viruses spreading.

We would dare to suggest that the reason for this article was not the concern about the emotional and physical health of Pravda.ru readers from the U.S., UK, Canada and other countries. The reason could be much more mundane. For example, it could be the fact that the audience of the English version of Pravda.ru is much larger than that of the corresponding version of RIA Novosti. Obviously, with unmatched resources.

The state news agency that receives funding from the state budget, including money for the maintenance of its English version, will not become more popular even through the headlines like "The world's hottest women".

The fact that these types of photo galleries would not help in forming the audience may be a revelation for the leadership of RIA Novosti in general and its English version in particular.

Experts polled by Pravda.ru believe that this type of publicity would not create steady audience. "It does attract visitors, but clearly does not create a stable audience," said German Klimenko, a project manager of LiveInternet.

In turn, the director of the Internet marketing holding "Arguments and Facts" Maxim Trishin said that such methods are expedient "if you want low quality traffic and need it urgently". He also believes that such headlines are not very good for reputable sites.

Managing Partner of Internet agency TRAFFIC Alexander Kim generally considers such methods impractical. According to him it is "somewhat a misinformation of the user." "Especially when it comes to authoritative and quality publications," he added. According to Alexander Kim, "the users must come for the content they are interested in."

The correctness of this statement will not be argued. Foreign readers of RIA Novosti come for the content that interests them and which the leading Russian news agency would willingly provide. Yet, it remains an open question whether the funds from the Russian budget are required to create such content.