All medicines you need can be found in your stomach 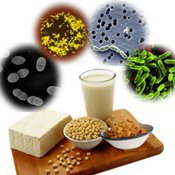 Despite all the contrivances of the civilization, mankind is getting sick all the harder and in more complicated ways. There are many things that can be blamed for this: the deteriorating environmental situation, physical inactivity, and never ending stress. The human immune system does not withstand the load. At the same time, many drugs that until recently were considered the supporters and saviors have been declared enemies.

Meanwhile, half a billion of microorganisms in our stomachs is a ready cure for all ills.

The era of antibiotics (from the Latin "against life") began with the discovery of penicillin by microbiologist Alexander Fleming. It seemed that the universal cure-all was found. Its production has been established as Europe was licking its wounds after the First World War. The aureus was widely spread. With the advent of penicillin gangrene has ceased to be a 100% killer. Infectious diseases ceased to be life-threatening. "Today, virtually every infection has its antibiotic," says Professor Ivan Uryupin MD. "However, antibiotics need to go away. We are filled with them to the eyeballs. We are filled to the extent that the organism, a living cell, does not understand how to respond to medication and disease. Along with pathogenic flora, antibiotics often kill the good flora. This causes a serious impact on our health." In addition, with the advent of each new antibiotic, infections nearly instantly react with a mutation, adapting to the new drug. This is a vicious circle. However, the situation is not hopeless. Nature took care of everything, placing the medicine directly in our stomachs. All we have to do is use it.

Probiotics are living micro-organisms, lactic acid bacteria, usually bifidobacteria or lactobacilli, sometimes yeast. They are the normal "inhabitants" of the intestinal tracts.

For the first time the term probiotic, i.e., "life" was proposed in 1954 during a study of the effect of various compounds on the intestinal microflora. Scientists have found that strains of Bifidobacteria in addition to being safe for humans have a great deal of useful properties: anti-infective, immunostimulatory, anti-allergenic and anti-stress. Yet, for the time being, no one seriously regarded these microorganisms. At best, they were used after treatment with traditional antibiotics, or as a prophylactic.

Now a biotechnological revolution is ongoing in the world. It is believed that the future of medicine is in the so-called gentle treatments of the new generation. There is an entire spectrum of such drugs, and the most effective of them are probiotics. In the West, doctors have long been trying to either not use antibiotics or use them in case of absolute necessity.

In Russia the status of probiotics is somewhat confusing. They are considered bio-additives or simply food. At best, they are referred to as preventive and restorative treatment components. Many doctors simply do not know of their existence, and are lost when asked to prescribe them. However, the Russian medical community is becoming increasingly more mature in their realization that probiotics are drugs, only cheaper and more effective than the conventional ones. Professor Uryupin: "Imagine that you or your loved one have back pain, and at some point you could not straighten up, and finally went to the doctor. You were diagnosed with hernia. You had a prospect of surgery ahead of you and all respective consequences.

However, the doctor, instead of suggesting you save up money for the surgery, recommended that you drink kefir, promising that two or three days later you would feel relieved. Do you think it is unrealistic? It is not, as it is all about probiotics contained in sour milk. They restore the damaged cartilage much better than a surgeon. They restore the broken link and the patient recovers.

There are plenty of these examples. Many doctors are simply not familiar with ​​probiotics. They can prescribe imported ones, while the domestic ones contain the types of microorganisms our grandmothers, mothers, and, accordingly, children, got accustomed to. Imported probiotics contain non-native flora, although they are well advertised and more expensive. They are considered a better option. Experts predict that in the next 20 years the proportion of probiotic products and the so-called functional foods that include live microorganisms will reach 30% of the total grocery market (currently only 3%). Instead of going to a pharmacy to buy medicine we will be going to a store (for kefir, yogurt, and cereal). Probiotics will replace 50% of the traditional medicines. Today there are nearly 100 registered probiotics.

Food industry of the developed countries produces a wide range of dairy products containing live microorganisms. Milk processing and utilization of one of its products - milk protein- is a modern trend in the food industry.

Even such a food monster like McDonald's is fighting against obesity, which it is largely to blame for (it introduced yeast probiotics that promote weight gain). Now a lot of money is allocated for the restoration of the lost.

What is left? Valuable peptides are derived from milk. Some of them, depending on conditions, can act as a mild regulator of blood pressure. Others affect the brain, actively helping to relieve stress or depression.
Today the world produces over 145 million tons of milk protein, an increase of 10-15% per year.

Unfortunately, raw milk has a very short shelf life. It can be extended only by new methods of processing. Unfortunately, these methods are not applied in Russia.  It is the short lifetime of living organisms that makes them underused in production. They are replaced with dry coli bacteria which are less effective.

In addition to probiotics, prebiotics are being used increasingly more often (mainly herbal compounds that stimulate the growth of good microorganisms and stimulate the growth of their own microflora) to improve the microecological status of the body. They help the probiotics to settle down in the body and increase resistance to infection as well as reduce the risk of malignant tumors.