Renewables can provide 80 per cent of our needs 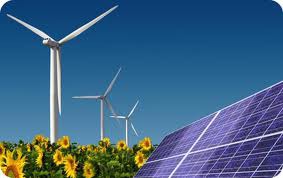 A UN report claims that renewable sources of energy can provide up to eighty per cent of our needs, so claim 120 experts working with the IPCC (Intergovernmental Panel on Climate Change). All that is needed is for full potential to be harnessed. Better still, it seems that the tipping point of 2ºC is achievable in terms of climate change. We're on track!

This week a four-day meeting of experts in Abu Dhabi, United Arab Emirates, concluded with the presentation of the report. The news is, in a word, optimistic. Renewable energy sources such as eolic power (wind turbines), wave power and power from rivers and dams (hydropower), biomass and sanitary landfills (digestion and combustion of methane gas) and solar panels can meet up to eighty per cent of our energy needs in the near future, freeing humankind from the prison of fossil fuels which apart from being a heavy burden for the economy, also pollute the planet. Furthermore, the 120-strong panel of experts, working with the IPCC in drawing up the report, consider that with the implementation of new measures, the threshold of a 2ºC increase by 2050 is attainable, this being considered as the tipping point, beyond which serious consequences begin to be felt.

Apart from delivering this optimistic note, the report serves to issue policy-makers with guidelines for furthering the production of renewable energy sources in their countries.

The report delivers studies of 160 scientific scenarios witnessed around the planet, based upon differing levels of renewable energy sources, environmental and social vectors. An in-depth report on four possible scenarios is presented, the most optimistic being one in which renewables could provide 77% of our global energy demand, up from 13% in 2008.

This would entail serious savings of CO2 and other Greenhouse Effect Gas (GEG) emissions, namely between 220 and 250 gigatons, from 2010 to 2050. The report states that renewable energy sources will increase naturally, but evidently with the implementation of enabling policies, their widespread use will be easier and faster.

For Christiana Figueres, the Executive Secretary of the UN Framework Convention on Climate Change (UNFCCC), the report is "most significant". "They must reach their goal by making use of renewable energy sources on a very large scale. It is also clear that ambitious national policies and strong international cooperation are together the key to the swift and extensive deployment of renewable energies in all countries."

First and foremost, according to Ms. Figueres, is the need for financing and technology to be made available to developing countries, specially the Least Developed Countries, whose increased demands for energy are set to skyrocket in the forthcoming decades, but also these are the countries in many cases, which will be the sources of renewables.

Therefore the onus is upon the industrialized nations to help, rather than hinder: "Industrialized nations need to create the right policy conditions and incentives so that the development and installation of clean energy technologies also receive a major boost in their own energy mixes."

Finally, the report concludes that renewable technologies will become increasingly attractive once the environmental impact of pollution is calculated and included in energy prices, this including pollutants and GEG emissions. Furthermore it points towards a scenario whereby renewable energy sources will describe a sustained decrease in cost in the decades ahead.

Quite how altruistic the "developed" nations will be in helping others, less developed, through no fault of their own, to become energy providers, remains to be seen.