Meteor shower can be seen tonight 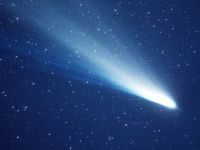 Phenomenon will be easier to see in the South, where up to 60 meteors per hour could fall. The meteor shower is the result of a debris trail left by Halley's comet.

From Thursday evening (5th) you can see in the sky a shower of meteors with the naked eye. The phenomenon is caused by debris from Halley's comet, which passes through the solar system every 76 years. The last appearance was in 1986. Although the comet is a rarity, the meteor shower is a show that happens every year, just when the planet passes through a cloud of debris left by the comet. According to the American space agency, in moments of greatest intensity, the shower may have 40 to 60 meteors falling per hour.

"The Earth passes through this cloud of particles from April 21 until May 12, but the next few nights are the moments of greatest intensity of the phenomenon," explained the director of iG Ibirapuera Planetarium, John Paul Delicato. "It happens irregularly, not something that happens once set time or another." 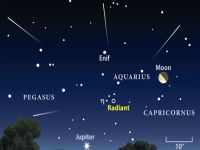 This year, the Southern hemisphere will be privileged with the best observation point, because of the angle of inclination of the Earth, and it will peak between Thursday night (5th) and Friday morning (6th). The new moon, which makes the sky darker, is another factor that will encourage the display of meteors.

Presently, Halley's comet is far away and will not be close to Earth until 2061. The meteors "began life as tiny specks of dust" from Halley's Comet as it passed around the Sun throughout the eons. Every May, Earth runs through the dust streams, which pass over the planet at 148,000 miles per hour. They vaporize thanks to air friction, and leave beautiful "shooting stars," or streaks of light.

In May, Eta Aquarids occurs and in October the Orioníd. The meteor showers received these names because of the constellations of Aquarius and Orion, where the so-called radiant meteor seems to emerge. "It seems that the shower comes from these constellations, but in fact it is only coming from their direction," said Delicato.

The best time to observe the phenomenon is at 4 o'clock in the morning hours when the constellation Eta Aquarids (the direction of meteor showers) is the highest horizon.