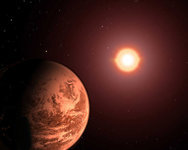 Planetary scientist Christopher McKay of NASA Ames Research Center and his colleagues have discovered that the surface of the red dwarfs planets that revolve around the stars may be covered with oceans that contain organic compounds. Thus, the list of potentially habitable locations in the universe has expanded.

The red dwarfs are the most common type of stellar objects in the universe. They are small and relatively cool stars, which, according to the astronomical classification, belong to the spectral type M or K. The diameter and mass of red dwarfs do not exceed one third of those of the solar objects, and the temperature of their surface reaches 3,500 Kelvin. The stars of this type emit little light, sometimes 10,000 times less than the Sun.

However, due to the low rate of combustion of hydrogen, the lifespan of red dwarfs may be very long - from the tens of billions to tens of trillions of years. Over time, these objects spend their hydrogen fuel reserves and subsequently transform into the blue dwarfs, and then - into the white dwarfs with helium nuclei. Red dwarf star Proxima Centauri (spectral class M5, 5Ve) is the closest one to the Sun.

Since the cycle of existence of red dwarfs is hundreds of times longer than that of the stars like the Sun, the likelihood of the development of organic life in such systems is quite high.

However, if life there exists, it is unlikely to be similar to the life on our planet. Experts believe that these worlds may resemble Saturn's moon Titan. This is the only one known satellite surrounded by a thick atmosphere. In addition, Titan has seas of liquid methane, which has repeatedly led to the discussion on the existence of life there. Some researchers believe that water is required to originate life, others believe that some biological forms can breathe hydrogen rather than oxygen and exhale carbon dioxide instead of methane.

"Historically, astrobiology has focused on liquid water as a source of life," says Christopher McKay. "Of course, the water proved to be the "life-giving" power on Earth, but liquid methane is currently of a particular interest to scientists."

McKay and his colleague Ashley Gilliam suggested that worlds like Titan cannot exist only in the vicinity of Saturn. To prove this, they modeled a world in terms of rotation around a dim red dwarf M4. The choice of luminaries was not accidental - this is the most common type in our galaxy of stars.

In addition, researchers found that celestial bodies similar to Titan may exist in stellar systems with hotter red dwarfs, such as M3. For example, near one of them - the star Gliese 581 - exoplanets have already been discovered. According to the researchers, while the giant planets in such systems are not capable of supporting life on their surface, they may have satellites that theoretically may have conditions for the development of living organisms.

However, there are some differences. Due to the outbreaks, the red dwarfs may emit more particles and ultraviolet light than the Sun. This may lead to the formation of a dense haze, which would not allow penetration of the sunlight. Thus, the surface of the planet can be very cool.

The peculiarity of the red dwarfs is that the light from them is shifted into the infrared part of the spectrum more so than the light from the stars like the Sun. In addition, if Titan is conditionally placed at the right distance from a star, it will receive the same amount of light as it would from the sun. As a result, the surface can be heated to 10 degrees Celsius, and at this temperature certain forms of life may function very well.

However, even under these conditions the planets like Titan may host oceans of liquid methane. Scientists estimate that for this to be possible, the distance between the planet and the red dwarf star of M4 type should be 8.4-23 percent of the astronomical unit (i.e., the distance between the Earth and the Sun), or 63-166 percent of AU to the star of M3 type (hot dwarf).

Originally, scientists assumed that the methane on extrasolar planets could be maintained in liquid form due to geothermal heat, but it turned out that such planet should emit approximately 20 times more heat than the Earth, and for a small celestial body it is simply unrealistic. Therefore, the talks about life on planets near the red dwarf are still only theoretical.