'Demon reptile' is not a missing link 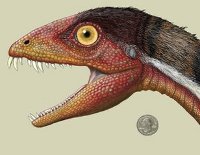 The skull of a previously unknown dinosaur with interesting teeth and a unique head shape was uncovered in Ghost Ranch, New Mexico. The technical description that appeared in the journal Proceedings of the Royal Society B claimed that this creature bridged a gap between fundamentally different kinds of dinosaurs. One news blog did not mince words: "New dinosaur species is a missing link."

But is it really? How was its "missing link" status determined? Was it simply declared a missing link whether or not this was empirically established?

Named Daemonosaurus ("demon reptile"), the dog-size dinosaur was found in what was called a "Late Triassic" rock layer. The skull and first few vertebrae of this interesting creature had a handful of features in common with a group of dinosaurs called "neotheropods." Theropods had lizard-like hips-as opposed to the bird-like hips of other dinosaurs-and walked on two feet. Neotheropod specimens, often with fewer "fingers" than other theropods, are mostly found in the Jurassic and Cretaceous rock layers that lie above Triassic beds in many locations.

But other features of the Daemonosaurus skull were dissimilar to neotheropods, looking more like "basal theropods." This term refers to the belief that certain theropods evolved earlier, leading to their placement at the "base" or trunk of an evolutionary tree diagram.

The study examined 319 characteristics, such as tooth shape and size, skull height and length, and the sizes and shapes of various holes in the skulls called fossae and fenestrae. These characteristics were then fitted into a "most likely" evolutionary tree diagram, which ended up showing Daemonosaurus on its own "branch" that extended backward in evolutionary time to the supposed origin of the "first" theropod dinosaurs.

The researchers compared Daemonosaurus to Tawa hallae, another dinosaur discovered at Ghost Ranch a couple of years ago. According to its technical description, Tawa was supposed to clarify "early" dinosaur evolution. But if it did, then why did authors of this later Daemonosaurus study admit "that theropod dinosaurs had a more complex evolutionary history prior to the origin of Neotheropoda than previously inferred"?

The study authors wrote, "Daemonosaurus is most closely related to the clade Tawa + Neotheropoda."

They described three somewhat obscure characteristics shared by Daemonosaurus, Tawa, and neotheropods, including a depression on their vertebrae and a protrusion on their jawbone. But one could find three characteristics in common between any set of animals with similar body plans, illustrating why no ancestor-descendant relationship was established by such a comparison.

After all that work, the researchers did not name a dinosaur from which or to which Daemonosaurus evolved. What does it link to if it is a missing link? The report merely listed characteristics in common or not in common with other groups of dinosaurs, then force-fitted those characteristics into a preconceived evolutionary model.

Evolutionists quibble over which dinosaur belongs on which evolutionary branch, but there is still not one example of a continuous series of transitioning dinosaur forms, let alone one that ascends the geologic column to show that the transitions progressed with time. All the dinosaur data, however, fit easily in the creation model, which actually predicts what is observed-no transitional features, just fully formed creatures fossilized mostly in a cataclysmic global flood.

Daemonosaurus is not a missing link. Instead, it looks like a separately created dinosaur-or a variety thereof-with all its features well-integrated and none of its features in a state of transition.