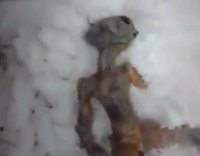 A curious video appeared on the Internet on April 17. The video uploaded on YouTube supposedly depicted an extraterrestrial creature. The creature, as it appears in the video, was found by Russian tourists traveling in Siberia.

The video has attracted a lot of attention in the whole world. It has already received over 4.5 million views on YouTube. People all over the world discuss the video on many forums and special websites devoted to UFOs and aliens.

The video, which lasts for a little more than a minute, shows the body of a bizarre creature, which appears to be a . The creature was found by two travelers in Siberia.

The number of news stories connected with UFOs has increased in the world considerably during the recent months. Aliens supposedly visited US military objects and observed the tragedy in Japan. As usual, there is no convincing evidence to confirm the news. All those reports are based on eyewitnesses' accounts and blurred photographs with luminous dots in the sky.

The Siberian alien was found near the village of Kamensk, in Russia's Buryatia Republic, north of Lake Baikal. The body is about 60 cm tall; the right leg of the body appears to have been severed.

Igor Milovich, one of the tourists, who found the body, believes that a special unit of the Russian army, which conceals the facts of contacts with extraterrestrial beings from the general public, made a mistake and lost the body in the woods.

"It's strange that we didn't find any traces of spaceships anywhere near," Milovich said.

The man behind the camera in the video uses very dirty language in his comments about the unusual finding. He says:

In the meantime, it became known yesterday that the video was a fake. The small dead alien is nothing but chicken skin filled with bread, reports. Police questioned the men who filmed the video, and they allegedly admitted that they had created the body themselves, just to have fun.

What if the young man was told to say so? Maybe special agents were forced to take efforts urgently to brush it all under the carpet?