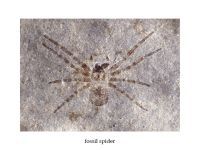 It's official: not the biggest, but the largest spider in history has been found in the People's Republic of China - a fossilised golden orb weaver sporting a leg span some 15 centimetres wide. Nephila jurassica is the largest fossilised spider in the history of our planet.

This female spider belongs to the Golden Orb Weaver family of arachnids and the specimen is called Nephila jurassica. She lived around 165 million years ago, had a leg span of around 15 centimetres and was discovered by a team led by University of Kansas Professor Paul Selden, Gulf-Hedberg Distinguished Professor from University's Palaeontology Institute.

One characteristic of this spider is that is weaved its webs, up to 1.5 metres in diameter, using a distinctively tough, golden silk, hence the name golden orb weavers. Proud to announce his find, Professor Selden stated in an interview with BBC "She is the largest known fossil spider. Her body is not the biggest but if you add her long legs, then she's the largest".

The find also sheds some light on the history of the spider - found at the bottom of a lake covered by volcanic ash in Inner Mongolia, everything indicates that she was the victim of a natural disaster. Whatever happened, the details of the find astonished the scientists. Professor Selden explained: "You see not just the hairs on the legs but little things like the trichobothria which are very, very fine. They're used to detect air vibrations. There's a very distinct group of them and they're a very distinct size which is typical of this genus, Nephila".