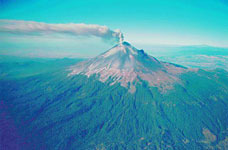 American archeologists believe that the high productivity of land of the ancient Maya was possible because of volcanic ash that rained down on the fields quite frequently. The natural fertilizer maintained the existence of thousands of people on unfruitful lands. Was it really so? It is an open secret that volcanic ash does not bring any good to the soil.

One of the most intriguing mysteries of the prosperity of ancient Mayan cities on the Yucatan Peninsula is the mystery of their existence under conditions of relatively primitive agriculture in a rather unfruitful region. To put it in a nutshell, no one knows where the Mayas were taking so much food from to feed thousands of city residents, who in their turn were not involved in agricultural activities. To explain this phenomenon, scientists put forward different theories some of which may seem unrealistic to many.

Professor Peyson Sheets of the University of Colorado said at the conference of the Society for American Archeology that the phenomenon of the Mayan agriculture could be based on volcanic ash. The theory is based on the discovery of large deposits of smectite in the ruined canals of the Mayan city of Tikal (presently Guatemala).

This mineral derives only from volcanic ash. The analysis, conducted by a group of geochemists under the leadership of Ken Tankersley, an anthropologist at the University of Cincinnati, showed that the African dust, carried to America by air currents, was not involved in the natural production of smectite. Scientists concluded that the ash found on the site was of local origin. It was erupted by volcanoes of Guatemala, Salvador, Honduras and Mexico.

The results of the analysis also showed that the minerals discovered on the site were formed from 340 to 990 year B.C. The city of Tikal appeared on the site some time earlier, in the beginning of the VII century B.C. Even if volcanic ash helped the ancient peasants, who lived near the city, it did not happen very quickly. The late period of the development of smectite coincides with the period when Tikal and its outskirts were abandoned completely. Why would people leave their lands if they had such valuable fertilizer at their disposal?

According to Mr. Sheets, the high productivity of Mayan agriculture was ensured by constant activity of Mesoamerican volcanoes. The scientist calculated that the fall of two millimeters of volcanic ash was enough to enrich the soil for some 20 years.

Ashfalls increased the harvesting of local soils by three or four times, Sheets said. In addition to that, ash particles killed harmful insects, which also increased harvests. Volcanic ash can be a very valuable fertilizer indeed, but only if it gets into the thick layer of soil, where decomposition of organic materials and minerals is especially active. However, the soil was not like that at all in the area of Tikal and nearby.

The soil formation process in Central America is a complicated one. There are no earthworms on rainless highlands of Yucatan. Those worms are the primary underground lifters in the majority of agrarian regions of our planet. The worms play an extremely important role in enriching the soil and mixing all of its components, which makes the soil much more productive. The worms do not inhabit rainless areas - they are replaced by drought-resistant maggots, ants and termites.

Volcanic ash is like weapons of mass destruction for those creatures. The dust literally chokes the insects, and the soils of Yucatan lose their natural processors. As a result, plants do not seem to be able to use the compounds of iron, magnesium, potassium and aluminium.

There is a fertilizer, but it is impossible to use it. Those who could increase the productivity of the soil, get killed by volcanic ash. Two millimeters of ash a year is enough to kill all soil insects. Therefore, a massive ashfall was supposed to considerably reduce the productivity of Mayan fields. The residents of Tikal would have abandoned the city before the beginning of the first millennium A.D., when the formation of smectite minerals began.

In addition, there are examples in the history of civilizations of Mesoamerica when the volcano eruption and the subsequent eruption of ash caused the destruction of whole cities. In the beginning of the first millennium A.D., ancient people were forced to abandon the city of Chalchuapa as a result of the eruption of Ilopango volcano. The volcano was far enough from the city, but the layer of ash that appeared on the fields nearby was 1-2 cm thick. According to the theory of Mr. Sheets, the amount of natural fertilizers was more than enough. However, no local resident decided to use that "manna from heaven" after the eruption. No settlement appeared near Chalchuapa for as many as 500 years afterwards.

Unlike ancient archeologists, the ancient Maya were perfectly aware of the fact that volcanoes could easily destroy them. It does not look like the people were happy about volcanic ash falling on their fields because they could use it as a fertilizer to increase their harvests. At the same time, they still collected rich harvests from their fields. How did it become possible?

Most likely, the Mayan peasants reasonably used the areas that were formed after bush and underwood fires. Such areas are known as milpas. Local peasants managed to derive hybrid and heavy-yielding sorts of basic agricultural crops which they were growing on milpas. The manual processing of land and the growth of several crops on one field (maize and beans, for example), allowed the Mayan peasants preserve the productivity of land for a long time. There was no need to change milpas regularly. The natural conditions of the Yucatan Peninsula made it possible to collect not less than two harvests a year.

In addition, in dry areas of the peninsula archeologists found traces of intensive agriculture. With the help of aerial photography, scientists discovered canals and so-called raised fields - artificially made long and narrow ridges of land. The fertility of such fields could make up to 8-10 centners of maize per hectare. Such fields appeared near Tikal first in 229 A.D. That was exactly the period when the city started to prosper culturally and politically.

It is worthy of note that the ancient Mayas liked to eat the fruits of the ramon tree, also known as the breadfruit tree. This tree needs very little care, but it gives very good harvests most of the time. The locals would also collect wild fruit and edible herbs as a supplement to their agricultural activities.

Therefore, most likely, the Mayan cities were not prospering because of volcanic ash. They were developing owing to ancient wisdom and labor.