Man on the Moon: The great American deception 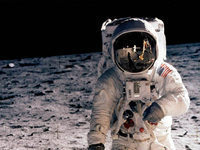 Over 40 years have passed since the landing of man on the lunar surface, and approximately a decade of rumors that this has never happened in the history of mankind. Conspiracy theory did not win, but made people think hard and dig deeper into scientific knowledge, which, in general, is always a good thing. Have the Americans walked on the moon, or not?

Beginning of the space age is not considered to be April 12 (the 50th anniversary of the first human flight into space we celebrated last week), but the launch of the Soviet Union's first artificial Earth satellite, Sputnik-I, launched on October 4 of 1957. The United States entered the space race on January 31, 1958 with the successful launch of Surveyor-I. By 1968, the Soviet Union has launched 74 objects into space, both automated and manned, and the United States has launched a total of 64 objects. Yet, the Americans were ahead of Russia in terms of manned flights, 18 American flights vs. 10 Soviet ones.

Astronauts performed nine spacewalks, while cosmonauts performed only one. The Americans carried out seven dockings of the manned spacecraft, while the Soviets did not carry out a single one. Other indicators were also not in favor of Russia, although even inveterate anti-Soviet individuals did not talk about Russia lagging behind. The U.S. was proactive during 1960s and achieved certain superiority only in the 1970s. The Soviet Union started that decade as an undisputed favorite, but by the 1970s it was over.

On May 25, 1961 President Kennedy gave a speech before the joint session of Congress. John F. Kennedy wanted to raise the prestige of America and asked Congress to significantly increase spending on space.

He said that given the big gap the Russians created with their powerful rocket engines that allowed them to gain a few months, and realizing that they would keep that leadership for some time achieving even more impressive successes, Americans still needed to make some efforts. The American president most likely did not realize that he announced the launch of a space competition between the two superpowers. He continued that the US should commit to the task to land a man on the moon and return him safely to the Earth before the end of the decade. None other space project in that period would have been more impressive for mankind, and more importantly, for future space exploration.

The Soviet Union continued to whip up an atmosphere of secrecy over its lunar project. CIA had no idea they were being fooled. On September 22, 1968 TASS reported the flight of spacecraft Zond-5 that orbited the moon and explored the lunar space. On the outside Zond-5 was similar to manned Soyuz spacecraft, but without the front section. The spacecraft was equipped with a device for measuring the background radiation during the flight and a tape recorder that broadcast the astronaut's voice from the board to test the quality of long-distance communication. American and European observers were pulling their hair out, feeling helpless as the Soviets were about to land on the moon.

On July 20, 1969, the Commander of Apollo 11 Neil Armstrong stepped onto the lunar surface. The crew included Buzz Aldrin (the pilot of the lunar module "Eagle") and Michael Collins (commander of the module pilot "Columbia"). It is worth mentioning that the previous crew of the Apollo 7, 8,9, and 10, gave their spacecraft amusing nicknames such as Snoopy or "sweetie." Apollo 11 that was intended to fulfill the American dream could not be named in honor of characters of popular comics.

Another myth was spread saying that the author of the theory of non-appearance of the Americans on the Moon was an American writer Bill Kaysing who published the book We Never Went to the Moon: America's Thirty Billion Dollar Swindle in 1976. However, the polls conducted in 1970 and 1976 clearly show that a great deal of people doubted the reality of landing of a man on the moon. The first critical voices were heard as early as in 1969, long before Kaysing's best-seller.

It must be admitted that William Charles Kaysing is number one person in the formulation of the main arguments of the lunar conspiracy theory. The arguments included the level of technological development of NASA that did not allow a man to land on the moon, lack of stars in the photographs from the lunar surface, astronauts' film that was supposed to melt in midday temperatures on the moon and had not; various optical anomalies in the photographs; waving flags in a vacuum; the smooth surface instead of the craters that should have been formed as a result of the landing of the lunar module.

All these arguments of the conspiracy theorists have been criticized by the opposing party. Entire volumes and piles of film were used to refute all of the above arguments. For lack of space, we cannot dwell on each case. All necessary information is easily accessible online. We will only note that one of the interesting rebuttal suggested that approximately 400 thousand people participated in the "lunar program" of NASA, and revealing the secrets to such enormous number of people does not give an absolute guarantee of their preservation.

The secret operation to deceive your own people seems too incredible. In this case not only the moral factor shall be taken into account, but also the logistical complexity of the event, the cost of which would have been much higher than the actual landing on the moon. It must be noted that the conspiracy theory was not taken seriously by the general public and officials who normally do not comment on it. Nevertheless, some arguments from the arsenal of the conspiracy theories were carefully studied by various organizations and have been refuted.