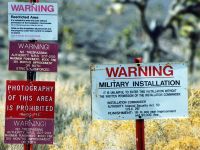 This Monday, the FBI published a document that apparently proves the capture of UFOs in the famous Roswell, New Mexico. According to the document, dated March 29, 1950, an investigator for the U.S. Air Force reports the meeting of three flying saucers, which were oval with a bump in the center (as in science fiction films dealing with the matter), about 15 m in diameter.

The document, sent by special agent, Guy Hottel, to the director of the FBI is available on the Internet with thousands of other documents in the new search system called "The Vault." The name of the researcher who discovered the flying saucers and the agent to whom he reported the incident were erased in the available online document.

The memorandum, located on page 34, can be read in full text.

Also according to the document, the investigator would have found in each one of the flying saucers three bodies similar to that of a human, but with short stature. The "beings" measured about 90 cm and were dressed in ultrathin metal clothes, according to what was reported.

Hottel informed that the investigator said he believed that flying saucers ended up being found in New Mexico "because the U.S. government has a very powerful radar in the area and believes that the radar itself could interfere with the mechanical controls of the flying saucers."

The city of Roswell became very famous after reports that a flying saucer crashed in the desert near a military base around the 2nd of July 1947.

According to several theories, the bodies of aliens were autopsied by the U.S. army, and they have covered up the incident.