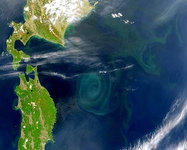 US scientists discovered two giant whirlpools in the Atlantic Ocean, off the coast of Guyana and Suriname. It became a sensational discovery because this part of the ocean has been studied thoroughly, and no one expected anything like that to appear in the area. More importantly, no one can understand where the whirlpools came from and what surprises they may bring to people.

According to Brazilian scientist Guilherme Castellane, the two funnels are approximately 400 kilometers in diameter. Until now, these were not known on Earth. The funnels reportedly exert a strong influence on climate changes that have been registered during the recent years.

"Funnels rotate clockwise. They are moving in the ocean like giant frisbees, two discs thrown into the air. Rotation occurs at a rate of one meter per second, the speed is sufficiently large compared to the speed of oceanic currents, on the border hoppers is a wave-step height of 40 cm," Castellane said.

Even during the dry months, when the movement of oceanic currents and the flow of the Amazon River practically comes to a standstill, the funnels do not disappear. Therefore, the nature of the funnels does not depend on the flow of water, which one of the world's biggest rivers brings into the ocean. The natural phenomenon, which creates the whirlpools, is unknown to modern science.

As a matter of fact, the phenomenon of giant whirlpools in the World Ocean is not new to science. In most cases, the craters, or rings, as scientists call them, are formed as a result of so-called vertical currents. The latter, in their turn, appear because of differences in water density which appear because of difference in temperatures of water layers. It is an open secret that cold water is thicker and heavier, so it goes down, underneath the masses of warm water, which is lighter. This is the reason why warm currents in the World Ocean always flow closer to the surface, whereas colder currents flow closer to the bottom.

However, such movement of water may not always depend on the difference of temperatures of the water column. The difference in salinity can also be a reason. The mechanism here is the same. The density of saltier water is higher, this water is heavier and it moves closer to the bottom, pushing less saltier water up. This type of vertical fusion occurs frequently in the tropics because high temperatures lead to the evaporation of water from the surface. The salt does not evaporate with water, though. It stays in the ocean, which raises the level of salinity on the upper layer of water. This layer "drowns" and gives way to less saltier waters of the depth.

Such vertical movements of water create giant whirlpools. The whirlpools, tens and even hundreds of kilometers in diameter, may last for months and even years, scientists say. The vertical movement of waters is a slow process, though. Why do those whirlpools exist for such a long time? This is partially the effect of Earth's magnetic field. In addition, marine water contains many charged ions, Na and Cl for example. To crown it all, water molecules are dipoles that are charged both positively and negatively.

Any dipole starts spinning when moving in the magnetic field. An oceanic ring gathers millions of billions of molecules together. That is why the giant circle movement triggered by the vertical movement of water may last for months and years mechanically. Ions also give more power to the craters. Natrium and Chlorum are charged as well, and their movement in the magnetic field of the Earth also leads to the appearance of the circle movement.

It is not ruled out that the reason for the appearance of the whirlpools off the coast of South America is the same as in other parts of the World Ocean. Scientists are currently studying the influence of those giant funnels on the climate of Latin America and Africa. Such whirlpools show influence on the atmosphere and form cyclonical air mass. They can also affect the movement of air mass formed in other places. For the time being, scientists do not know how the newly discovered water craters can affect the climate of Central and South Americas.