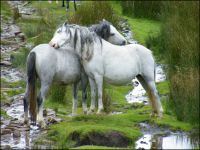 The last wild ponies in Snowdonia, Wales, have found a friend - a horse-whisperer called Barry Thomas, who will try to tame the semi-feral herd of ponies, said to be at risk of extinction unless they are brought under control.

The herd of ponies in the Carneddau mountains in Snowdonia range, north Wales, has ranged round this area for thousands of years - today there are only around 300 females (mares) and the authorities claim that unless they are tamed, they are condemned to extinction.

These ponies have had hardly any human contact, so need to be broken in to secure their future. Enter Barry Thomas, from Crymych, Pembrokeshire, Wales, the horse-whisperer, who is engaged in communicating with the animals using eye contact and whispering techniques.

In an interview with BBC, Barry Thomas stated: "Hopefully it will mean that they're in a better state of mind, that they will be less frightened of being handled. I get them used to different sounds, movements and materials. For example, we use plastics and tarpaulin, which can move quickly. Horses perceive us as predators, so we need to build up trust between horse and human. Horses communicate in silence - eye contact is very important and is a way of having a conversation with the horse".

Gareth Wyn Jones, President of the local society Cymdeithas Merlod Y Carneddau explained that Barry Thomas learned his trade from the American Monty Roberts, an inspiration for the movie Horse Whisperer. "The ponies haven't had any human contact, they're very wild," he said. "It's all to do with eye contact with the ponies apparently. A lot of it is done mentally, it's psychological training really".

"Breathing into a horse's nose with your nose is a little horse whisperer trick-of-the-trade that really melts some horses and is perceived by them as a sign of friendliness, and is what they do to each other in greeting. Another little trick some enjoy along this line (especially the younger the horse, like a foal or a yearling, but some older horses like it, as well) is: whistle into their nose. Doesn't have to be any particular tune, just pleasantly whistle into their nose and it can really melt some. This is how we sometimes get a foal to stand still for baby exams/shots, etc. Really captivates them. Try it! If you want, suck on a mint before breathing into a horse's nose or whistling into it and many really love that scent. Incidentally, whistling some pleasant tune while you work with a horse in general can calm some horses. Singing to them can help, as well, though they seem to like the female higher pitched singing voice tone the most, I've noticed"*.

15:38
Zelensky's office threatens to destroy the Crimean bridge
15:32
Spectator: Ukraine's position might cause a change of power in Europe
14:48
Ukraine's Commander-in-Chief speaks about the difficult situation of the Ukrainian Army
20:14
Russia to build 300 shelters for state-of-the-art fifth-generation aircraft
19:33
Russia names the reason for imposing sanctions on Czech Republic and Bulgaria
18:05
Onet.pl: Polish authorities lie about the gas situation
17:37
Bloomberg: Europe is turning its back on Ukraine
17:01
Russia debunks the myth of Western superweapon
16:49
Global Times: Putin's ultimatum and US actions hit the dollar hard
16:43
Surgeon mutilates 7-year-old boy during home circumcision
World
Sohu: Russia deliberately doesn't hit the supply lines of Western weapons in Ukraine