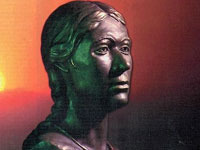 In 1993, archeologists found the mummified body of a young woman on Ukok Plateau in Russia's Altai region. The plateau is located in the area of Russia's border on Mongolia. The mummy of the woman with a tattoo on her shoulder became known as the Princess of Altai. Scientists from Novosibirsk say that the cause of the woman's death, who died 2,500 years ago, is still shrouded a mystery.

Scientists conducted the MRI examination of the mummy in June 2010. It was the first time, when a mummified body was studied with the help of an MRI scanner in Russia. Experts continue to study the photos which they received as a result of the procedure. According to Andrei Letyagin, the chairman of the MRI Center of the Siberian department of the Russian Academy of Sciences, the final results of the research will be exposed in May-June of the current year.

"The cause of death remains unknown. I don't believe that it will be possible to find an answer to this question because there's no brain and no internal organs in the body," Letyagin told RIA Novosti. The organs, the scientist added, were harvested form the body prior to the funeral.

Most likely, the Princess of Ukok did not die as a result of some injuries. "Her skull is fully preserved, and so are the bones," he added. The MRI research did not have the goal to determine the cause of death of the princess, he also said.

Vyacheslav Molodin, deputy director of the Institute of Archeology and Ethnography of the Siberian Department of the Russian Academy of Sciences, told RIA Novosti that the mystery of the Princess of Ukok would most likely be unveiled later, when humans invent a new technology for it.

Molodin said that the woman's tattoo also remains a mystery, just like her cause of death. However, scientists managed to obtain the DNA of the Princess of Altai. The discovery helped to reconstruct the ethnic history of the Pazyryks, who inhabited the Altai mountains during IV-III centuries B.C.

The discovery of the Ak-Alakha-3 burial ground is one of the most important recent scientific discoveries in archeology. In addition to the mummy of the 25-year-old woman wearing a fur coat and a wig, there were six saddled horses found in the burial chamber. Details of the finding indicated that the woman came from a noble clan. The woman was also wearing a red belt. The belt is said to be a symbol of a warrior. The larch-tree stick, which she was holding in her hand, was a ritual symbol. During the pre-Buddha times, such sticks symbolized a tool of Creation; they would be put in the hands of supreme divine personas.

The Princess of Ukok does not relate to any of yellow races. She has a European appearance, she is 170 centimeters tall. A DNA analysis revealed her haplogroup R1a - Aryan blood. According to experts' estimates, 70 percent of eastern Slavs belong to this haplogroup.

Altai Aborigines say that the mummy is their progenitor. They call her Princess Kadyn, or Kydyn. The tattoo on her arm conceals very important information for mankind. The time to read the information has not come yet, Aborigines say. They also believe that the woman was a priestess and that she passed away voluntarily to protect the Earth from evil spirits.

Native residents also say that scientists troubled her remains and angered the powerful gods. An earthquake occurred in the region soon after the mummy was discovered. The locals urged the scientists to put the mummy back in the burial hill to avoid new disasters. Rumor has it that the number of wildfires and storms started growing after the mummy was removed from her chamber.

The tattoo on the body covers the woman's both arms from her shoulders to her hands. The tattoos were preserved well only on the left arm. A mythical animal is depicted on the left shoulder of the mummy - an antlered deer with the beak of a vulture. The antlers are adorned with vulture heads; a similar head can be seen on the back of the animal, the body of which is twisted. A sheep with its head thrown back can be seen below. The mouth of a spotted panther with a long tail is seen at the legs of the sheep.

The clash between vultures and hoofed animals corresponds to the semantics of the conflict between two worlds: a predator from the lower, chthonian world against herbivorous animals that symbolize the middle world.

There is also a theory that says that the tattoo depicts Arkhar and Irbis - the totems of her clan. A legend says that snow leopards guard the road to Shambala - the country, which Altai Aborigines call Belovodye (White Water). They consider Irbis a holy animal, which they never hunt.

The mummy is being stored at the Museum of Archeology and Ethnography in Novosibirsk. The general public and the administration of the Altai Republic claim the Princess of Altai must be returned to their territory. Novosibirsk scientists claim in return that there are no adequate facilities in the republic to store the unique finding.

In 2009, Gazprom assigned 250 million rubles for the reconstruction of Anokhin's National Museum in the city of Gorno-Altaisk. By 2012, it is planned to build a mausoleum in the shape of a burial hill in the city. In one of the halls of the museum, below the ground level, visitors will be able to see the sarcophagus with the mummy. The sarcophagus will be placed inside a vacuum capsule made of glass.