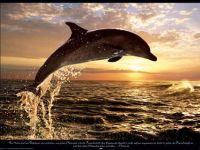 Stories of a trapped grandmother walking out of her house unscathed, a dolphin found alive in an inland rice field, a dog which stood over his injured friend until he was rescued are the only lights in a story of total darkness as the courage and fibre of the Japanese people astonishes the world. We present the latest news.

There are good stories among the horror: a dolphin, washed inland by the devastating tsunami in Japan on March 11, precisely two weeks ago, has been saved by two men who found it thrashing around in a net; a video has emerged of a dog leading reporters to his stricken friend. The official death or missing toll from the earthquake and tsunami is 27.140.

The dolphin was rescued from the rice field inland near Sendai as it thrashed around in nets. It has been returned to the sea. Another marvellous story that has emerged (source: IFAW) is that of a dog standing near a pile of rubble in a destroyed town. As reporters approached, the animal led them to his friend, trapped under the debris of a building. He walked over to the injured dog, stood there, looking at the reporters then back to his friend, as if to say "Here he is, rescue him".

Meanwhile the number of dead has been officially quoted at 9.700 with 17.440 disappeared. It is expected that most of the missing will soon figure among the list of the dead, due to the devastation caused by the massive earthquake two weeks ago - force 9 on the Richter scale, the fifth most powerful in a century and the worst disaster to hit Japan since the atomic terrorist attacks in 1945 on Hiroshima and Nagasaki. The tsunami following the quake was 30 to 40 feet high in places.

220.000 people are living in the 2.000 temporary shelters supplied by the Government. The Provinces of Miyagi, Iwate and Fukushima were the worst affected. 18,000 houses have been destroyed and 130,000 buildings damaged.

The nuclear crisis following the tsunami at the Fukushina Daiichi plant has caused 25 embassies to relocate from Tokyo, eight of these outside Japan. The situation continues to be critical, with dangerously high levels of radiation (10,000 times more than normal) in reactor 3, leading experts to conclude there may have been damage to its core. All residents within a 30 km radius have been asked to leave voluntarily and the Government reserves the right to order a total evacuation if the radiation level continues to rise.

Two Japanese tourists in China have been interned in hospital with high levels of radiation - yet claim they have not been anywhere near the Fukushima plant. Xinhua also reports unusually high radiation levels on a Japanese ship arriving in the Chinese port in Xiamen. Radioactive iodine levels in the Tokyo water supply have fallen, but remain high in water supply systems in other areas of the country.

The Japanese Prime Minister, Naoto Kan, has described the situation as "very unpredictable". The rebuilding cost has been estimated at 309 billion USD.