NASA to fly on cocaine 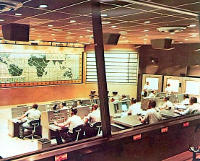 Strange metamorphoses are happening in NASA: its leadership is engaging into research projects, spending all budgets funds on research, while the government wants new shuttles, scheduled flights and reasons to brag. Such mismatch of the goals may cause problems, and it is not without reason that the senators are already hinting that it is time to curtail the funding for irrelevant research. However, the National Aeronautics and Space Administration is in no hurry to listen to the officials. It suddenly got concerned with many other issues, including the death of an employee at the launch site and cocaine at the launching pad. Journalists immediately remembered that people have been killed at Cape Canaveral before, and drugs were found at the Kennedy Center. The story of the astronauts who allegedly performed a flight drunk has surfaced again.

On March 7 somewhere in the building of the space center a bag with suspicious white powder was found. A spokeswoman for the inspection of NASA Renee Johansen told the media that it was 4.2 grams of cocaine. "Our officers found it during a routine inspection of the premises. We conducted a preliminary examination, which showed that the package had a narcotic substance in it," she said, adding that the scandalous discovery has already been transferred to a police laboratory for an investigation. However, Mrs. Johansen had not responded to the main question of where exactly the cocaine was discovered and how it got there.

Several days later NASA spokesman Allard Byutel held a briefing where reporters expected to get detailed information. However, they were disappointed as nothing new was said, except that the personnel would be tested for drugs, but this was rather obvious. This is a standard procedure included in the safety protocol of all "space" objects. The spokeswoman declined to clarify who was tested (or at least how many people). However, nothing else could be expected: the last time there was a similar scandal, the details were unveiled with a great delay.

Incidentally, bags of white powder are found at NASA all too often, given that the organization has consistently emphasized its "zero tolerance" to drugs and alcohol. A previous similar incident took place as recently as mid-January of this year. Then a small amount of cocaine was found in the hangar where pre-flight preparation of the space shuttle Discovery was conducted. Director of the launch pad Bob Cabana told reporters that the incident was a rare, isolated case. As it turned out, he does not know his subordinates too well.

The last time the culprit was not found, which will likely be the case this time, although the corporate policy of NASA provides for a range of measures - for example, the staff can be searched even without reasonable suspicion, and drug testing is compulsory. As a result of the January cocaine episode Mr. Byutel declared that approximately two hundred employees who had access to the hangar were subject to such testing. There was not a single positive result, as if the bag of powder materialized out of thin air. No disciplinary action was taken, not to mention a criminal case.

Bob Cabana, a former astronaut who is now heading the entire spaceport said he was shocked by the incident, but added that it should not cast a shadow on the work in the field of space research conducted by the dedicated team. He did not fail to reassure the public that the emergence of cocaine in the hangar does not mean that there is no order at the station. The shuttles are well protected, and all the related activities are conducted under strict control, even with the assistance of police, if necessary. Yet, if we think how many problems arise at the launch of each spacecraft, the optimism of Mr. Cabana is hard to believe.

Drug abuse is not the only wrongdoing of NASA employees that has become publicly known. In 2007, a scandal broke out when media obtained a report of an independent medical examination, according to which at least two astronauts were operating a spacecraft drunk, and the company doctors were covering for them. The names, dates, flights and other details were not provided, but the National Aeronautics and Space Administration had no right to ignore such a serious charge.

Some time later, it unveiled its own report that stated that within two decades of space flights not a single case of operating under the influence among astronauts was recorded. There could not be a different statement because for NASA the reputation is above all else. Any confirmed embarrassing story threatens to turn into a loss of funding.

In Russia, a glass of champagne before the launch is not considered a mortal sin, but Americans are downright obsessed with discipline. They isolate the astronauts the day before the flight to minimize all sorts of risks - infections, viruses, food poisoning, and alcohol intake. On the other hand, if they are isolated in a room where the unidentified NASA employees leave bags of cocaine, then the security is out of the question.