Recent research has revealed a further breakthrough against cancer: carbon nanoparticles help to deliver anti-cancer medicines to the areas of the body where they are needed with greater precision, making the treatment much more effective. These particles are nanodiamonds, attached to the chemotherapy drugs. 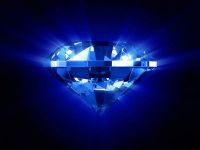 The article* in question reveals that anti-cancer drugs are often ineffective because the cancer cells eliminate them before they have the chance to react - according to the study, this is responsible for up to 90% of treatment failures in cases of malignant cancer.

Enter the team of Dean Ho, from Northwestern University, Evanston, in the State of Illinois, USA. This biochemical engineer bet on the qualities of nanodiamonds, which are particles based on carbon and measure between two to eight nanometres in diameter. Due to the structure of these nanodiamonds, the cancer cells cannot expel them with such ease.

The secret is in their octahedral (eight-edged) structure, which makes it difficult for the cellular transport proteins which usually escort drugs away from the cell to deal with. The drug therefore stays inside the cell for a longer period of time. How? The multifaceted characteristics of the nanodiamond make it possible to attach an electrostatic charge to one facet, while the drug can be attached to another neutral surface; thereby the nanodiamond stays within the cell longer, delivering the drug for a greater period of time.

According to the research, nanodiamonds have the added advantage of being non-toxic, do not cause inflammation, are easy and cheap to produce.

The effect was obvious: tumours shrank, the mice survived longer.