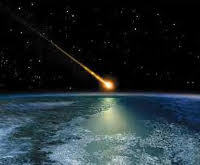 NASA will do anything for money. Recently NASA claimed aliens exist and that there is now proof from a meteorite containing fossils of bacteria. NASA claims that meteors and meteorites originated from other planets. Why couldn't they have originated from Earth?

In the Earth's past there was powerful volcanic activity which could have easily spewed dirt and rocks containing microbes into outer space which not only could have eventually reached Mars but also ended up traveling in orbit through space that we now know as meteors.. A Newsweek article of September 21, 1998, p.12 mentions exactly this possibility. "We think there's about 7 million tons of earth soil sitting on Mars", says scientist and evolutionist Kenneth Nealson. "You have to consider the possibility that if we find life on Mars, it could have come from the Earth" [Weingarten, T., Newsweek, September 21, 1998, p.12].

MIT scientist Dr. Walt Brown (a creationist) in his book In "The Beginning " points out that during the great Genesis flood, as recorded in the Bible, the fountains of the deep that were let loose could have easily spewed out meteors and meteorites into space that very well may have contained micro-organisms such as bacteria. One thing for sure is that life requires intelligent creation and doesn't come by chance. NASA knows all this but looking for life on other planets is a powerful way to motivate people to want their government to give more and more money to NASA. NASA, after all, is a business with hefty salaries at stake.

However, there is no evidence that random or chance mutations in the genetic code are capable of producing greater biological complexity (vertical evolution) among species. Most biological variations are the result of new combinations of already existing genes and not because of mutations which are almost always harmful precisely because they are accidents in the genetic code.

All of this simply means that real science supports faith in God. Science cannot prove that we are here by chance (evolution) or by design (creation). However, the scientific evidence can be used to support one or the other. It is only fair that evidence supporting intelligent design be presented to students alongside of evolutionary theory, especially in public schools which receive funding from taxpayers who are on both sides of the issue. Also, no one is being forced to believe in God or adopt a particular religion so there is no true violation of separation of church and state. As a religion and science writer, I encourage all to read my Internet article "The Natural Limits of Evolution" at my website www.religionscience.com for more in-depth study of the issue.

The author, Babu G. Ranganathan, has his bachelor's degree with concentrations in theology and biology and has been recognized for his writings on religion and science in the 24th edition of Marquis "Who's Who In The East." The author's articles may be accessed at www.religionscience.com.