New data shows that the ice caps are not only melting, but that the melting rate is increasing, meaning that exponential flooding cycles will be unleashed within living memory of most people who read this piece. We are confronted by a global phenomenon, if not a looming catastrophe. 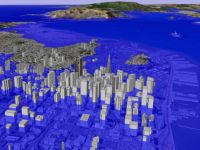 In 2006, the combined ice sheets of Greenland and Antarctica were losing some 475 billion tonnes of ice a year due to melting. The Greenland sheet melt is increasing by 22 GT (billion tonnes, GigaTonnes) a year and the Antarctic sheet melt is increasing by 14.5 GT per year, particularly worrying because this pole is colder and has more ice and the trend will only increase.

In short, we are looking at exponential melting phenomena and a corresponding rise in ocean levels...spelling catastrophe for low-lying areas over the coming decades. Mark our words. Those who deride articles such as these as nonsense will in just a few years be hanging their heads in shame.

The new evidence is provided by the Twin Grace satellites, which orbit Earth in unison, providing date on the slightest changes in gravity. Their findings contradict the most pessimistic predictions arising from the IPCC (Intergovernmental Panel on Climate Change) project in 2007, of a rise in sea levels of 59 cm, although the IPCC at the time had stated that the figure was open to correction.

Studies by several scientific groups have indicated that the 59 cm. level could in fact easily become translated into a rise is sea-waters of a metre or even two, which would have not only serious, but catastrophic results.

As it stands today, reliable scientific evidence points towards a minimum rise in the sea level of 1.3 mm per year just from the polar ice caps (there are other vectors in play, namely the melting mountain glaciers and rivers). As the Earth's median temperature rises, it is natural that the polar ice caps will start to feel the kick-in effects of exponential temperature rise factors.

Certain countries, namely Bangladesh and the Maldives, along with all low-lying Ocean-bordering cities, will then feel the consequences.