In Ankara Zoo, Turkey, a Bengal Tiger has killed a lion, after finding its way through the fencing which separated the animals. Turkish zoo officials say the Bengal Tiger killed the lion with one swipe of its paw, severing its jugular vein. 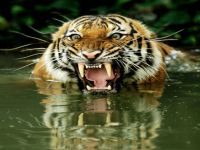 The lion was left dying in a pool of blood. Officials deny reports that the fencing was deficient or that the zoo is dangerous, claiming it was a one-off incident which has now been solved. Ankara Zoo has six tigers and two lions.

The tiger stuck its front leg through a gap in the door which separated the animals and dealt a swift blow the lion's neck, killing it almost instantly. Media reports that the tiger had torn through the fence and then torn the lion to pieces were totally misfounded, zoo officials claimed.

However, the question remains, why is this incident only being publicised now, since it happened on September 4, 2010?

The Ankara Zoo (Ankara Hayvanat Bahçesi) was founded in 1933. Among the main attractions are its great cats, birds, monkeys, ungulates, snakes and a large aquarium.

The Bengal Tiger (Panthera tigris tigris) is a subspecies found in India, Bangladesh, Nepal and Bhutan, being the most numerous among the tiger subspecies - there are around 2,100 living in the wild today. It is the second largest species after the Siberian Tiger. The Bengal Tiger hunts at night and its prey are mainly buffalo, deer, wild pigs and other mammals. It can eat up to 27 kilogrammes of meat in a night.