Werewolves exist. Look at these pictures of an eleven-year-old Thai girl called Supatra Sasuphan, who has stated she is proud to be named the Guiness Hairiest Girl in the World. However, she is not a monster, she is a very intelligent girl and her network of friends has increased due to her condition. A lovely story... 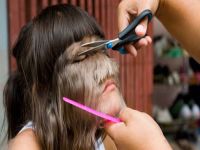 Supatra Sasuphan is eleven years old. She is a schoolgirl from Bangkok and she has Ambras Syndrome, of which only fifty cases have been registered since Medieval times. Ambras syndrome explains the secret behind werewolves, namely think hair growing on the face, ears, arms, neck and back.

The good news is that Supatra is not a modern-day monster, neither is she treated as such by the community in which she lives. She has an extensive network of schoolfriends and is proud to have entered the Guinness Book of Records. Her reaction was the witty quip "I'm very happy to be in the Guinness World Records. A lot of people have to do a lot to get in. All I did was answer a few questions and then they gave it to me."

In fact, the award has made her even more popular at school. She explains that in the past some pupils made fun of her and called her names (wolf girl, monkey face) but these days "they don't do it any more". Supatra loves dancing, swimming and having fun and is used to her condition. Her bubbly personality is one of the reasons why the community has accepted her so well and why the teasing has stopped.

Her mother has to trim the hair so that it does not grow into her eyes. Several attempts have been made to cure her, including laser therapy, but the hair has not only grown back, it is thickening.