Strange and rare, this bottom shark still guards many mysteries of science. Just over one hundred years ago, Japanese fishermen for the first time captured a very strange shark, deep off Yokohama. As everything happens for a name, the shark won the name Goblin Shark (Mitsukurina owstoni). 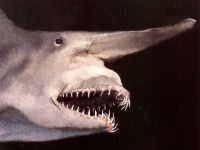 The friendly face of this fish.

The goblin shark is an upper-level carnivore in its natural habitat. This is a rare beast, only found in few places, usually deep beyond 300 meters. Those places are Japan, South Africa, perhaps off Portugal, and, in one strange instance, in the Indian Ocean, a cable malfunction necessitated the raising of the cable, and an awl-like shark's tooth was found embedded in the wire covering. The cable had been at 750 fathoms, and the tooth belonged to a goblin shark.

As they stay near the sea bottom, they are usually caught via deep bottom-set gillnets and sea-bottom long line fishing. They are also sometimes caught by trawling. In addition, they are sometimes found entangled by deep-sea fishing lines.

Recently, one of the animals was captured near Sao Paulo and analyzed by researchers Gadig Otto, UNESP São Vicente, and Teodoro Vaske Jr. of UNISANTA Santos.

The mouth stretches out and the teeth are sharp, they capture prey from the bottom of the sea. It is unclear exactly how long snout is, but probably it offers a larger surface for its sensory organs, which enables it to detect the tiny electrical fields generated by their prey. The liver accounts for about ¼ of the total weight and has the same function as in other sharks: working as a swim bladder, allowing it to rise or fall in the water column without major problems.

It reaches more than 6 feet long and feeds mainly on octopus, crabs and fish.

Translated from the Portuguese and apprended by: